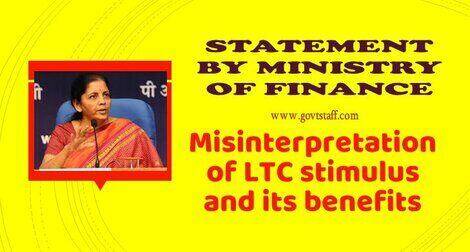 A report has appeared in the Economic Times Markets (ETMarkets.com) which gives the impression that the LTC voucher scheme for Government employees may not be attractive. Unfortunately, the piece which it relies on has a serious factual error in its understanding of how Government LTC works. It is based on the erroneous assumption that leave travel money can be retained by paying income tax without travelling. The key assumption in the report claims:

“They would be better off paying taxes on the LTC amount availed instead.”

The Government LTC is quite different from Leave Travel Allowance in the corporate sector. A person claiming LTC is not eligible unless he actually travels; if he fails to travel the amount is deducted from his pay and he may be liable for disciplinary action. He does not have the option of keeping the money and paying income tax. Under the government system, the employee had only two choices:

1)Travel and spend (and the incidentals like hotel, food,etc. are to be incurred by him) or

2) Forgo the entitlement if not claimed within the date.

Now a third option of “spend on something other than travel” has been given. In the current Covid environment, travel carries serious perceived health risks.

The assumption in the report that employees would otherwise not pay GST when they purchase something from their money and are only incurring it because of the scheme is surprising. Everybody pays GST on their consumption unless they choose to buy without bills in black, a practice the Government obviously does not condone and which hopeful the ET does not want to encourage. Incidentally, the entitlements under the scheme have been worked out at full cost (i.e. including the GST element in fares).

Surprisingly, the same piece relied on acknowledges that :“the central government employees are least impacted in terms of savings due to lockdown and no salary loss”. It is precisely for this reason that they are in a position to boost their own spending on goods or services of their own choice, using the LTC money as effectively a steep discount to reduce the cost of whatever they choose to buy. Rhetorical questions based on erroneous factual assumptions on Government rules, based on corporate sector practices, do not enrich the debate.