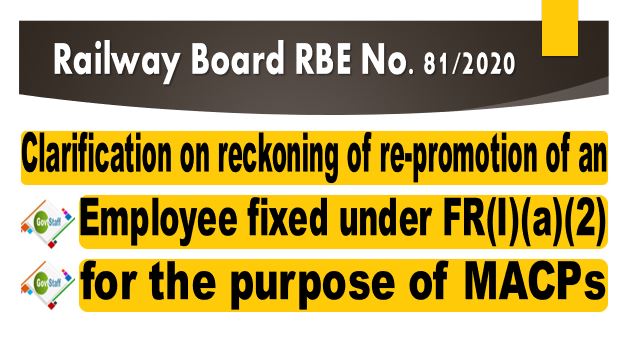 The General Managers (P),
All Indian Railways and PUs.

Sub: Clarification on reckoning of re-promotion of an employee fixed under FR 22(I)(a)(2) for the purpose of financial upgradation under MACPS.

References have been received in Boards Office from some of the Railways, seeking clarification on the above mentioned subject. The issue has been examined in consultation with DOP&T, the nodal department of the Government on MACPS. It has been observed that MACPS guidelines do not make a special provision for transferred employees vis-a-vis other employees in the new organization for determining their eligibility for further financial upgradation, as the actual pay drawn by a transferred employee on promotion /re-promotion in the new organization is of no consequence for determining his eligibility for further financial upgradation under MACPS. It has further been observed that MACPS does not allow for ignoring promotion earned in the new organization . As such it is clarified that promotion earned in the new organization either to the same level (i.e. level from which the employee was reverted in the old organization before transfer) or to a higher level is to be counted as an offset against entitlement for further financial upgradation under MACPS. For better appreciation illustrations are cited in the enclosed annexure. The cases may be decided accordingly.

2. This issues with the concurrence or the Finance Directorate of the Ministry of Railways.

1.Illustration cited by Southern Railway is as under:-

* In this case the employee is eligible for 3rd financial upgradation in GP 4600 after 10 years from re-promotion or 30 years from the date of direct entry grade whichever is earlier. In this case it is 01.10.2009.

In this case the employee is eligible for 3rd financial upgradation after 10 years from re-­promotion or 30 years from the date of direct entry grade, whichever is earlier. 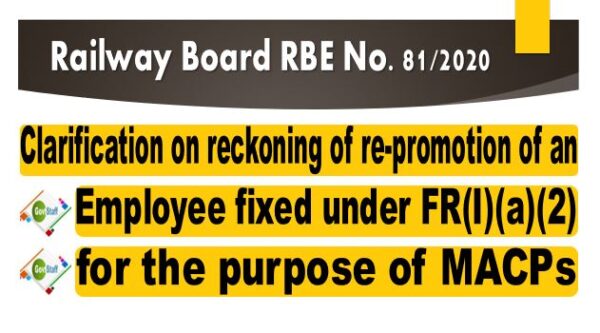