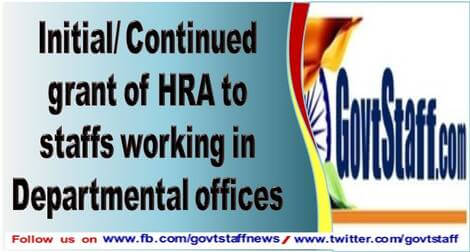 All Heads of Circle,

This is regarding proposal for initial grant I Continued House Rent Allowance to staff working in offices situated in village /Gram Panchayat within a 08 KM from the periphery of the municipal limit of qualified city under Rule 03 b (iii) HRA General Rules and orders.

2 It has been noticed while examining the above proposals that proposal are being received in Directorate with abnormal delay from the Circle offices. The delay in submission of proposals are being viewed seriously. The Circle should ensure that the proposal are submitted well in advance.

3. The Circles are further requested to follow the following guidelines while submitting the proposals to the Directorate.

(a) Initial Grant of HRA

(i) The initial order for grant of HRA under para 3(b) (iii) of the OM. dated 27.11.1965 will continue to be issued by the Ministry of Finance (Department of Expenditure).

(ii) These issues should be examined at the time of opening of office and submit proposals within 03 months of opening of Offices , which qualify the condition for grant of higher HRA.

(iii) These proposals should be examined as per instructions issued from time to time and submit proposal in the prescribed check list through Circle Office along with the concurrence of CIFA.

(iv) The original dependency certificate issued by the collector/Dy. Commissioner having the jurisdiction over the place should be submitted with the proposal.

(b) Continued grant of HRA

(i) The further extension of grant of continued HRA for next 03 years will be issued by the Directorate in the consultation with Financial adviser as per MF OM No 11023/3/86-E.II (B) dated 01. December, 1989.

(ii) There is no need for submission of income and cost statement of the concerned offices along with the proposal. Only the original dependency certificate issued by the collector/ Dy Commissioner having the jurisdiction over the place, to be submitted with the prescribed check list by Divisional office to concerned Regional/ Circle office.

(iii) These proposals should be examined as per instructions issued from time to time and submit proposal in the prescribed check list through Circle Office along with the concurrence of CIFA.

(iv) The proposal for continued grant of HRA should be submitted at least 03 months before the ending of current period of continued HRA granted by the Directorate.

(v) A monitoring mechanization to be made in the Division office/ Regional and Circle office so that such proposals should be monitored on periodically, prepare and submit proposals to Directorate within a prescribed time. The proposals received after prescribed time will not be proceeded in the Directorate.

Attention is invited on para 3 (a) of HRA General Rules and these orders may be followed. There is no need for further extension of continued HRA for the area of Gram Panchayat that has been included in the Municipality I Corporation UA and applicable rate of qualified city is to be paid from the date of included from the limit of the named qualified city.

4. The Circle are requested to launch a special drive in the matter during the month of April 2021. The Circle are further requested to prepare a list of all such cases to submit it to this Directorate by 30.04.2021 and review the present cases and process/ submit the proposal as per above guidelines to Directorate so that the further orders may be issued by the concerned offices in time.

These instructions should be followed strictly. 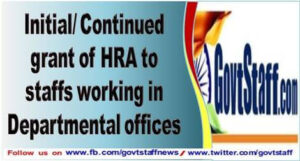