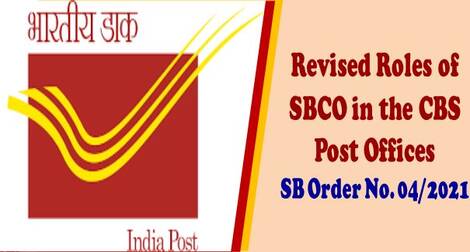 All Heads of Circles / Regions

After implementation of CBS in Post Offices in the year 2013, nature of works of SBCO had got changed and thereby roles of SBCO were revised and circulated vide SB Order No. 14/2015 dated 19.10.2015 with Addendum I & II dated 25.05.2016 & 04.08.2016. Thereafter, changes in the operational, accounting and technological procedures viz. Issue of KVP/NSC in the shape of Account, CBS – CSI GL Integration, introduction of Common Long Book etc have also taken place. Various references are received from some Postal Circles and SBCO Union/Associations for revision in roles of SBCO. Accordingly, it has been decided by Competent Authority to revise the roles of SBCO and a revised set of roles of SBCO superceding the roles prescribed vide SB Order No. 14/2015, is hereby annexed.

2. This revised set of roles is applicable only in case of CBS Post Offices where CSI is implemented and GLs are integrated. In respect of other CBS Post Offices, no change in the roles of SBCO is now proposed.

3. In respect of Non-CBS Post Offices, the SBCO has to perform all the duties viz. Ledger Agreement, Maintenance of Statistical Register, Preparation of Interest Statement, SB-62, SB-62(a), SB-72 etc prescribed in Manual of SBCO Procedure and duties prescribed in different orders issued from time to time.

4. Circles are requested to take necessary action in this regard and this order may be circulated to all the Post Offices.

5. This is issued with the approval of DDG (FS).