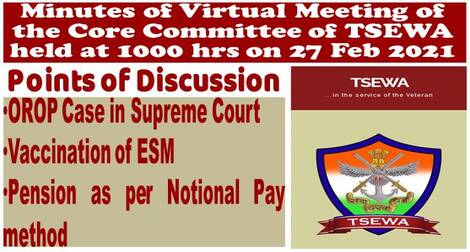 The President welcomed all present in the meeting and thanked them for their efforts to attend the virtual meeting. He requested the General Secretary to commence the proceedings.

Item No. I. OROP Case in Supreme Court: General Secretary informed that final hearing of the OROP case has been postponed for a later date and hoped that something positive comes out.

Item No. III. TSEWA Office Building: General Secretary informed TSEWA has received a donation of Rs 36000/. last week and approximately Rs 1.00 lakh during the month. President hoped that more donations will be received after sending another request from him to all members. Cmde Sandhu reiterated that an agreement should be signed with the developer/builder and advance be paid from the donations received and the balance may be paid from a loan from the corpus. The loan could be repaid from future donations or savings. The President directed that the Committee may examine various proposals and finalise at the earliest before the real estate prices go up.

Item No. IV. Election of TSEWA Executive Committee: General Secretary informed that elections will be conducted during the General Body Meeting scheduled in Jun 2021 and the recommendations of NEC made during the last meeting would be considered for approval during GBM if there are no fresh nominations / contestants.

Item No. V. Donation from Lt Col VRS Ramana Reddy: General Secretary appreciated the veteran Officer for donation of Rs 10000/- for TSEWA office building and a Dell Laptop to Miss Sandhya who is studying in Degree Course. The laptop was found in excellent condition and only the battery had to be changed by TSEWA.

Item No. VI. Office Expenditure: General Secretary informed that TSEWA has reduced its office expenditure from Rs 1.25 lacs to Rs 75000/. after the resignation of the previous accountant and the load shared by Sreenivasa Reddy and Anand. He proposed to transfer this saving Rs 50000/- per month to TSEWA Office Building Fund. Core Committee accepted the proposal.

Item No. VII. COVID Vaccination of ESM in North East: Col LM Manongba informed that the staff at their polyclinic has been administered with the first dose of vaccination and they have found no adverse effects of the vaccination.

Item No. IX. Pension as per Notional Pay Method: WO Thiruchelvam has pointed out that PCDA has not fixed the pension of few ESM as per the Notional Pay Method, which is greater than the pension from OROP Method. President Brig CS Vidyasagar had advised such ESM to approach AFTs once they are functional, as TSEWA cannot file the case on their behalf.

Item No. X. Pitiable case of a Quadriplegic ESM Sep Sathya Narayan Raju: President explained the horrible conditions of quadriplegic patients bedridden for life and could not stop his tears in emotion. He informed that Brig PT Gangadharan, who himself is a Quadriplegic patient, has brought out a case of an ESM whose daughter is not able to pay the college fees due to the pitiable condition of the family and requested the TSEWA Charity Division to consider the case sympathetically as and when they receive the details from Veteran Brig PT Gangadharan. Further, he assured that TSEWA shall put in its best to get the Special Family Pension entitled to the family.

Item No. XI: Temporary TSEWA Office Building: Hony Capt B Joseph has offered the first floor of his house for the office till TSEWA shifts to New Office Building being purchased, so that TSEWA can save on some rent for the building. Further he suggested that the proposed new building should be nearer to the area where maximum ESM are settled. However considering the proximity to the bank, a ground floor house has already been finalized and that the office would be shifted by 01 Mar 2021.

There being no further points, the meeting was closed at 11:20 AM.