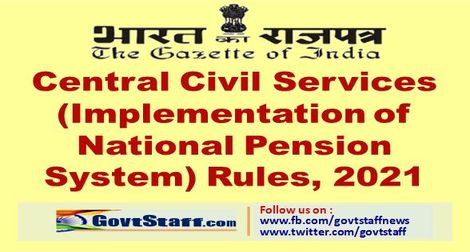 MINISTRY OF PERSONNEL, PUBLIC GRIEVANCES AND PENSIONS
(Department of Pension and Pensioners’ Welfare)

G.S.R. 227(E). In exercise of the powers conferred by the proviso to article 309 and clause (5) of article 148 of the Constitution and after consultation with the Comptroller and Auditor-General of India in relation to persons serving in the Indian Audit and Accounts Department, the President hereby makes the following rules regulating the methods of implementation of National Pension System, namely:-

1. Short title and commencement. – (1) These rules may be called the Central Civil Services (Implementation of National Pension System) Rules, 2021.

2. Application. – Save as otherwise provided in these rules, these rules shall apply to the Government servants, including civilian Government servants in the Defence Services, appointed substantively to civil services and posts in connection with the affairs of the Union on or after 1st day of January, 2004, but shall not apply to,-

3.  Definitions. –  In these rules, unless the context otherwise requires,-

(b) “Accumulated Pension Corpus” means the mandatory value of the pension investments accumulated in the Individual Pension Account of a subscriber under the National Pension System;

(c) “Annuity” means periodic payment by the Annuity Service Provider to the subscriber on purchase of annuity plan out of the Accumulated Pension Corpus;

(d) “Annuity Service Provider” means a life insurance company registered and regulated by the Insurance Regulatory and Development Authority and empanelled by the Authority for providing Annuity services to the subscribers of the National Pension System;

(f) “Central Recordkeeping Agency” means an agency registered under section 27 of Pension Fund Regulatory and Development Authority  Act,  2013 to perform the functions of recordkeeping, accounting, administration and customer service for subscribers to schemes;

(h) “Cheque Drawing and Disbursing Officer” means a drawing and disbursing officer functioning under  a Ministry or Department (including Central Public Works Department, Forest Department and Departments in which the provisions of Central Public Works Account Code are authorised to be followed) or a Union territory, who is authorised to withdraw money for specified types of payments against an assignment account opened in his favour in a specified branch of an accredited bank;

Read also |  Non-payment/Delay in payment of retirement benefits on account of delay in verification of Caste Certificate in respect of retiring employees : RBE No. 33/2022

(m) “Head of Department” means an authority specified in Schedule 1 to the Delegation of Financial Powers Rules, 1978, and includes such other authority or person whom the President may, by order, specify as Head of a Department;

(n) “Head of Office” means a Gazetted Officer declared as such under rule 14 of Delegation of Financial Powers Rules,1978, and includes such other authority  or person whom the Competent Authority may, by order, specify as Head of Office;

(q) “National Pension System” means the contributory pension system referred to in section 20 of the Pension Fund Regulatory and Development Authority Act, 2013 whereby contributions from a subscriber are collected and accumulated in an individual pension account using a system of points of presence, a Central Recordkeeping Agency and pension funds as may be specified by regulations by Pension Fund Regulatory and Developement Authority;

(s) “Pension fund” means an intermediary which has been granted a certificate of registration under sub-section (3) of section 27 of the Pension Fund Regulatory and Development Authority Act, 2013 by the Authority as a pension fund for receiving contributions, accumulating them and making payments to the subscriber in the manner as may be specified by regulations;

(u) “Subscriber” means a Government servant who subscribes to a scheme of a Pension fund;

(2) Words and expressions used herein and not defined but defined in the Fundamental Rules,1922, the Central Civil Services (Pension) Rules, 1972, the Pension Fund Regulatory and Development Authority Act, 2013 or Pension Fund Regulatory and Development Authority regulations have the same meanings respectively assigned to them in those Act or Rules or Regulations. 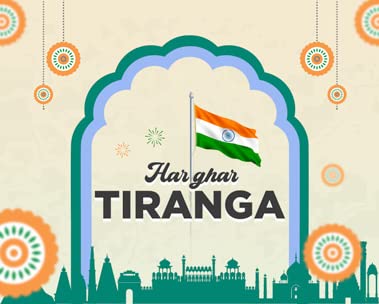