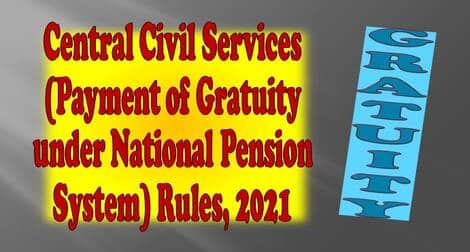 MINISTRY OF PERSONNEL, PUBLIC GRIEVANCES AND PENSIONS
(Department of Pension and Pensioners’ Welfare)

G.S.R. 658(E). — In exercise of the powers conferred by the proviso to article 309 and clause (5) of article 148 of the Constitution and after consultation with the Comptroller and Auditor-General of India in relation to persons serving in the Indian Audit and Accounts Department, the President hereby makes the following rules, namely:-

1. Short title and commencement.- (1) These rules may be called the Central Civil Services (Payment of Gratuity under National Pension System) Rules, 2021.

2. Application.– Save as otherwise provided in these rules, these rules shall apply to the Government servants including civilian Government servants in the Defence Services, appointed substantively to civil services and posts in connection with the affairs of the Union on or after the 1st day of January 2004, and to whom the Central Civil Services (Implementation of National Pension System) Rules, 2021 apply :

3. Definitions. – In these rules, unless the context otherwise requires, –

(1)(a) ‘Accounts Officer’ means an officer, whatever his official designation, of a Ministry or Department functioning under the scheme of departmentalisation of accounts, who, inter-alia is responsible for receipts, payments, Internal Audit and accounting functions of an office or Department or Ministry of the Central Government or Union territory and includes officers subordinate to the Accountant General who is entrusted with the function of maintaining the accounts or part of accounts of the Central Government or Union territory;

(b) ‘allottee’ means a Government servant to whom Government accommodation has been allotted on payment of license fee or otherwise;

(e) ‘Form’ means a Form appended to these rules;

(i) ‘Minor’ means a person who has not completed the age of eighteen years;

(j) ‘Qualifying service’ means the service rendered while on duty or otherwise which shall be taken into account for the purpose of payment of gratuity admissible under these rules;

(2) Words and expressions used herein and not defined but defined in the Fundamental Rules, 1922 or the Central Civil Services (Implementation of National Pension System) Rules, 2021 shall have the meanings as respectively assigned to them in those rules.

4. Regulation of claims to gratuity.-(1) Any claim to gratuity shall be regulated by the provisions of these rules in force at the time when a Government servant retires or is retired or is discharged or is allowed to resign from service or dies, as the case may be.

Read also |  Providing list of organizations covered under the administrative control of ministries/ departments of Govt. of India: CVC Circular No. 18/09/21

5. Right of President to withhold gratuity.- (1) The President reserves to himself the right of withholding gratuity, either in full or in part, and of ordering recovery from gratuity of the whole or part of any pecuniary loss caused to the Government, if, in any departmental or judicial proceedings instituted while the Government servant was in service, the retired Government servant is found guilty of grave misconduct or negligence :

Provided that the Union Public Service Commission shall be consulted before any final orders are passed by the President under this rule:

(b) No gratuity shall be payable to the Government servant until the conclusion of the departmental or judicial proceedings referred to in sub-rule (1) and issue of final orders thereon.

(3) The President may at any time, either on his own motion or otherwise call for the records of any inquiry and revise any order made under these rules and may confirm, modify or set aside the order, or remit the case to an authority directing such authority to make such further enquiry as it may consider proper in the circumstances of the case, or pass such other order as he may deem fit :

Provided that no order enhancing the amount of gratuity to be withheld or withdrawn, shall be made.

(4) The President may at any time, either on his own motion or otherwise review any order passed under these rules, where extenuating or special circumstances exist to warrant such review or when any new material or evidence which could not be produced or was not available at the time of passing of the order under review and which has the effect of changing the nature of the case, has come, or has been brought, to his notice :

Provided that no order enhancing the amount of gratuity to be withheld or withdrawn, shall be made.

(b) judicial proceedings shall be deemed to be instituted —

(i) in the case of criminal proceedings, on the date on which the complaint or report of a police officer, of which the Magistrate takes cognizance, is made, and

(ii) in the case of civil proceedings, on the date the plaint is presented in the court.