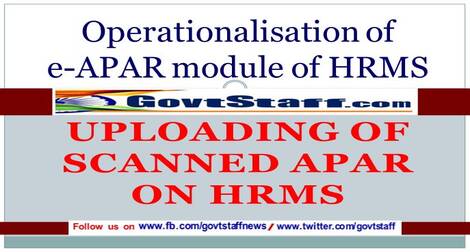 Sub: Operationalisation of e-APAR module of HRMS-uploading of scanned APAR on HRMS -reg

Vide Board’s letter under reference, it was advised that APARs of all Group ‘C’ employees for the year 2020-21 onwards would invariably be initiated through e-APAR module of HRMS only and further APARs for the last 10 years upto 2019-20 shall be uploaded in the HRMS portal.

2. The matter has since been reviewed in Board’s office based on the requests received from various field units and CRIS. Taking into account of the functional requirement as well as the technical problems associated with uploading of APARs for the 10 years. it has now been decided that APARs of Group ‘C’ employees may be uploaded in the HRMS portal as mentioned below :-

3 This issues with the approval of Competent Authority.