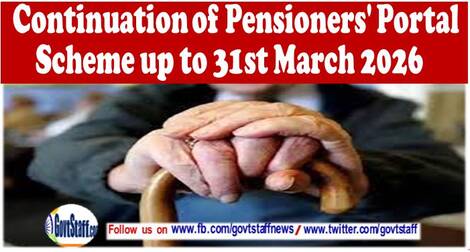 I. OBJECTIVES OF THE SCHEME

The Scheme is primarily aimed at making the pension/retirement online processing related services, Pensioners’ Welfare activities, information dissemination, awareness campaigns and grievances handling mechanism accessible online to the pensioners. This help bridge the gap between the pensioners and the Government. It is also expected to serve as a one stop grievance handling and information source for the pensioners of Government of India (especially civil pensioners) across the country.

The objectives of the Scheme are:-

II ACTIVITIES OF THE SCHEME

At present following activities are being operational through the Pensioners’ Portal: –

CPENGRAMS (Centralized Pension Grievance Redress And Monitoring System)– CPENGRAMS is an online grievance registration and redressal portal. All Ministries/Departments including Railways, Post, Defence with their subordinate units are linked in CPENGRAMS and is providing online resolution to the pensioners’ grievances.

2. Pension Adalat– This Department has started unique experiment of holding Pension Adalat, wherein grievances received from pensioners are segregated by their nature and accordingly linked to the department concerned . The stake-holders viz . the concerned Department, the PAO, the concerned Bank and representative of the pensioner are invited on a single platform and the grievances are resolved across the table.

3. Bhavishya– It is a landmark in digitization of Pension processing for civil pensioners which enables generation of e-PPO . It is mandatory for all civil ministries excluding Defence, Post and Railways to process the pension case through Bhavishya.

4. Sanklap – It aims to prepare retirees for post-retirement life and act as a facilitator in the entire process.

5. Anubhav – It is online facility for retirees to submit their experiences of working with government and to preserve their rich experience for future generation. All Ministries/Departments including Railways, Post and Defence are on the board of Anubhav.

6. Promotion of DLC– Unavailability of life certificate in banks’ record is major cause for discontinuation of pension To ensure transparency in the system and to provide comfort for pensioners in submitting life certificate, DoPPW is promoting use of Digital Life Certificate amongst Central Government Pensioners.

7. Awareness workshops – Workshops are being organized at 3 levels:-

Under the Scheme provision has been made to sanction Grant-in-Aid up to a monitory limit of Rs.75000/- per Pensioners’ Association identified to participate in the implementation of the Scheme to defray expenses on specified components. The maximum permissible amount on the individual components has been prescribed as follows:-

Depending upon their individual needs the Pensioners’ Associations will have flexibility on spending on various approved items of components as mentioned above within the overall sanctioned amount. This flexibility will be to the extent of 25% on higher/lower side of individual component subject to overall spending within the sanctioned grant. The Pensioners’ Associations will also be provided necessary hardware/software for the purpose of lodging grievances etc. online on CPENGRAMS.

The financing of the Scheme will be through Demands for Grants of M/o Personnel, Public Grievances  & Pensions  –  No extra  budgetary  sources, external aid, state  share etc., are involved.

VI. EXTENSION OF THE SCHEME

Prior to its extension, the third party evaluation was done by Indian Institute of Public Administration (IIPA) vide its Third party evaluation of Scheme – “Pensioners’ Portal” in May, 2021 and its detailed appraisal having been done by AS & FA (Home) has been approved for continuance by the Competent Authority for next five years beyond 31st March, 2021.