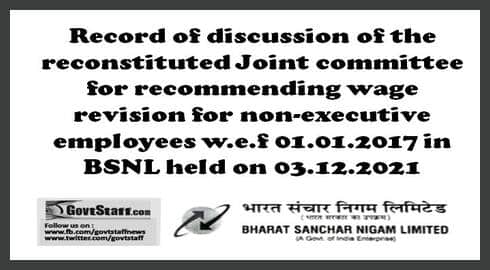 Wage Revision for non-executive employees w.e.f 01.01.2017: Record of discussion of the reconstituted Joint committee in BSNL held on 03.12.2021

Subject: Record of discussion of the reconstituted Joint committee for recommending wage revision for non-executive employees w.e.f 01.01.2017 in BSNL held on 03.12.2021.

The second meeting of the reconstituted Joint committee was held on 3.12.2021 in the Board Room, 3 Floor, Bharat Sanchar Bhawan, Janpath, New Delhi. The following were present in the meeting.

At the outset, Sr. GM(SR) welcomed the worthy Chairman and all the esteemed participants from management and staff side. It was informed that in the first meeting held on 18.11.2021, the staff side had requested the management side to present a draft proposal in the next meeting for further discussions. The proposal had been drafted and a power point presentation of new scales was shared /discussed.

At present there are total 33048 non-executive employees comprising of 18553 absorbed employees & 14495 BSNL recruitees and around 30% employees are stagnating.

It was explained to the staff side that new Pay scales have been designed on the following principles:

(1) There is no reduction in the Pay (basic+DA) of any employee after implementation of new pay scales.

(2) Stagnation in the existing pay scales has been largely addressed.

(4) Financial burden has to be minimum so as to make the Proposal viable, as any additional financial burden is to be met only from internal resources of the company.

a) It was informed that the Pay scales in 2007 were designed as per details given below:

b) New pay scales proposed by the management side notionally w.e.f from 1.1.2017 are designed as below:

Staff side was informed that:

a) New pay scales have been designed to take care of Stagnation issue and BSNL recruitees will get additional benefit on account of increase in EPF contribution by BSNL.

c) There are a number of CPSUs which are loss making and the government has to decide in totality. Whatever Proposal Joint Committee recommends, should be with minimum financial implication.

d) Feedback was sought from staff side on following points:

The Staff side agreed to examine the draft pay scales proposed by the Management and to discuss in the next meeting. However, they stated that:

The management suggested that the staff side can send suggestions/proposals based on the actual Stagnation/pay anomaly cases of the employees for further discussion. The meeting closed with a vote of thanks to the chair, all the participants and to the SR Cell team.

All members of the Joint Committee (By name)
Copy to:-
PPS to Director (HR), BSNL Board.