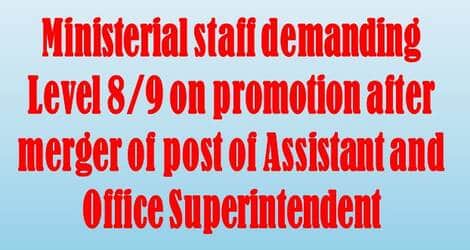 The Ministerial Staff Association, Survey of India has requested the Secretary to the Govt. of India, Ministry of Science & Technology, Department of Science & Technology, New Delhi to consider the comments/facts/proposal submitted by the association to grant of Level 8/9 on promotion after merger of post of Assistant & Office Superintendent as per 6th CPC recommendations. The Association has also requested Department to heard the association before finalizing the Cadre Review, if considered necessary.

Sub: Cadre Restructuring Proposal of Group ‘B’ & ‘C’ Posts/Cadres of Survey of India – Regarding.

Department’s kind attention is invited to our letter No.CHQ- 07/MSA-(2022) dated 31st January, 2022 on the subject matter vide which a detail comments of stake holders along with a complete proposal in respect of Ministerial Cadre of Survey of India has been submitted to the Surveyor General of India, Dehradun along with a copy to the DST for their necessary action. A copy of the same is again submitted for your perusal and Department’s further necessary action.

2. In this regard, it is submitted that it has come to the notice of our Association that final Cadre Restructuring Proposal of Group ‘B’ & ‘C’ cadre has been submitted to the Department by the Survey of India. However, no official information is available with us. We are not aware the facts that whether the Survey of India has considered our demands/proposal submitted under above referred letter or not. It was also requested by the association in above letter that the association may be heard before denial of points, if any, submitted by association on draft proposal report. The Department is well aware that the last meeting with association on the subject matter was held on 20.10.2010 i.e. 12 years before as already mentioned in the proposal. During that time when the meeting was held entire proposal of Cadre Restructure was different from this proposal. We have submitted several requests to permit us a meeting with Surveyor General of India to discuss our numbers of pending issues. But till today no meeting have yet been permitted by the Surveyor General’s Office.

View :  Sealed Cover Promotion and Implications on the Government servants at the time of promotion - Summary of procedure updated upto 30.08.2022

3. Before submitting comments of stake holders by the Ministerial Staff Association on behalf of our Cadre, we were approached all office bears of MSA and after several detailed discussions through virtual meeting and telephonic conversation we proposed the cadre with full comments and justifications. Department is aware that our intake in the cadre is through SSC in the grade of UDC and LDC. As such graduate level entry in the Cadre is there so that considering facts of functional requirement, educational qualifications and emerging new technology in the Organisations we have proposed creation of new posts right from LDC to Director, up-gradations of pay level and change in nomenclature. So that highly educated and specially trained Technical officers of Survey of India should keep away from the day to day administrative jobs like accounts, establishment etc. The matter was also discussed from time to time with the presiding authority of Department as well with Organisation of Survey of India.

4. On perusal of cadre restructuring proposal submitted by a board of officers, it was found that even the recommendations of Sixth Central Pay Commission for subordinate/non-secretariat administrative cadre starting from LDC/UDC has not been taken into consideration. The recommendation of the merger of Assistant and Office Superintendent and further grant of pay scale of PB-2 Grade Pay Rs. 4800 (Level-8) with NFU after 4 years in PB-2 Grade Pay Rs. 5400 (Level-9) to promotional post of merged grade. It is also a basic need of the Organisation on the functional requirement to create adequate posts to serve present and future administrative needs of SoI. During re-Organization of Survey of India in 2002-2003 it was also left. The new posts in Ministerial cadre must be created as proposed by the Association so that all administrative and accounts functions should be done by Ministerial Staff only along with store, estates, steno, reception and security functions on need base. It is again reiterated that Cadre Restructuring of Ministerial Staff should be done to utilise higher qualifications. The engineering and technical cadre of the Organisation should be utilized to complete the important projects like SWAMITTVA, NAMAMI GANGE, NHP etc.

View :  Good News! Lottery for Central Government Employees in December : After DA, TA, Appraisal now there will be promotions

It is requested to kindly consider the comments/facts/proposal submitted by the association. If Department consider necessary, to heard the association kindly intimate the earliest, please.