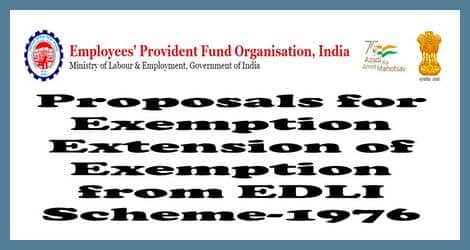 Proposals for Exemption / Extension of Exemption from EDLI Scheme-1976

Proposals for Exemption / Extension of Exemption from EDLI Scheme-1976

Sub: — Proposals for Exemption / Extension of Exemption from EDLI Scheme-1976.

It has been observed that various proposals regarding grant of exemption/ extension of Exemption from EDLI Scheme – 1976 have been forwarded by field offices to Head Office for approval of CPFC.

2. In this regard, the following provisions governing the same are highlighted:

Exemption to be granted under Section 17 (2A) stipulates the following:

[“The Central Provident Fund Commissioner may, if requested so to do by the employer, by notification in the Official Gazette, and subject to such conditions as may be specified in the notification, exempt, whether prospectively or retrospectively,any establishment from the operation of all or any of the provisions of the Insurance scheme, if he is satisfied] that the employees of such establishment are, without making any separate contribution or payment of premium, in enjoyment of benefits in the nature of life insurance, whether linked to their deposits in provident fund or not, and such benefits are more favourable to such employees than the benefits admissible under the Insurance Scheme. ”

Exemption to be granted under Section 17 (2B) stipulates the following:

‘Without prejudice to the provisions of sub-section (2A), the Insurance Scheme may provide for the exemption of any person or class of persons employed in any establishment and covered by that scheme from the operation of all or any of the provisions thereof, if the benefits in the nature of life insurance admissible to such person, or class of persons are more favourable than the benefits provided under the Insurance Scheme.”

3. As is evident from the above, there is basic difference between the two provisions. Whereas, in the former, exemption is granted to establishment as a whole for which Central Provident Fund Commissioner is the competent authority, in the case of latter, it is granted to a class of employees ‘or’ employee(s) for which powers have been delegated to Additional Central Provident Fund Commissioner (HQs) or Addl. CPFC, as per Gazetted Notification {(G.S.R 299(E)} dated 28.04.2021 (copy enclosed).

4. Further, vide Circular dated 29.04.2021 (copy enclosed), it was also intimated that all such proposals for grant of exemption from EDLI Scheme, 1976 that may have been forwarded to HO are required to be re-examined by concerned office in the light of the above amendment. In the pending exemption proposals where the establishment may have sought exemption for a “class of employees “, where such class may be of regular employees of the establishment or any other such defined class, appropriate action for grant of exemption may be taken in accordance with relevant directions issued from time to time as mentioned under reference. Further, for ease of referencing, list of documents is also attached herewith as in Appendix 2.

5. It is, however, noticed that proposals for grant of exemption from EDLI Scheme – 1976 are invariably being received in Head Office without clearly stating as to under which Section [17(2A) or 17(2B)] the exemption is sought. There could be cases that need not be referred to Head Office as the competent authority would be Additional Central Provident Fund Commissioner (HQs) or Addl. CPFC. In order to remove this confusion, the following instructions are issued for strict compliance:

7. Further, in order to have regular monitoring and check on/of pending EDLI proposals at Head Office, a monthly report is hereby prescribed by way of Google spreadsheet (link pasted below) that may be updated by Zonal Offices by 5th of every month. The same is to be uploaded as ‘NIL’ if there is no pendency. The said list shall include both cases under Section 17 (2A) as well as Section 17 (2B).

[This issues with the approval of CPFC]

(Letter Head of the Zone)

Sub: Certificate for Exemption / Extension in lieu of EDLI Scheme -1976.

Read also |  Death Claim Settlement: EPFO instruction to give priority in the events of industrial accidents

This is to certify that:-