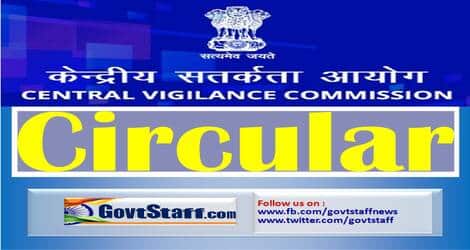 Subject: Nomination for recognizing the work of officials / personnel of Ministries / Departments / PSUs / PSEBs who have been vigilant / alert in their assigned tasks leading to prevention of misappropriation of funds / unwarranted incidents etc. for saving the organization from financial / reputational risk.

The Commission always gives highest importance to ensure integrity in public governance through the tool of Preventive Vigilance. In every organization there may be cases where prompt and preventive action has been taken by the officials/staff members which have helped the organization in avoiding misappropriation of funds etc.

2. The Commission has been consistently making an endeavor that such vigilant/alert actions of the officials need to be recognized who have played very important role at a given point of time by exercising deep sense of involvement and taking appropriate timely action leading to prevention of misappropriation of funds/ frauds/ unwarranted incidents etc. for saving the organization from financial / reputational risk.

4. In this connection, all CVOs including part-time CVOs are requested to kindly identify such preventive actions which have been taken by the officials in the last one year in their organization. The concerned identified officials/staff members who have played pivotal role in the preventive actions may be sent to the Commission with the approval of the Chief Executive Officer of the organization.

5. The desired information may kindly be furnished to the Commission in format attached herewith by 15th September 2022 at email kumar[dot]arvind72[at]nic[dot]in

6. This issues with the approval of the Commission.

All CVOs of the Organization/Ministries/Departments

2. The above information has been checked and the name of the officials/staff for recognition has been duly approved by the Chief Executive Officer of the organisation.

Signature of the CVO

News 854 CVC 39
Newer Post
Conduct Inquiries under Sections 7A & 14B by officers in different hierarchies in field offices – EPFO clarification
Older Post
Simplification of Passport Rules: Government servants need not obtain an NOC for the passport