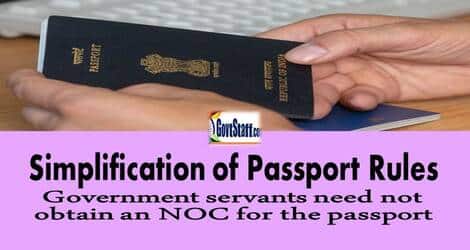 Simplification of Passport Rules: Government servants need not obtain an NOC for the passport

Simplification of Passport Rules: Government servants need not obtain an NOC for the passport

As per simplification of passport rules, now the government servants need not obtain an NOC for the passport. They can simply fill up the Annexure – H of the passport application and give an intimation to their department to obtain a passport.

There are many cases in which still the undersigned is being put up a lot of cases to obtain passport NOC. It is not at all needed so long as a mere intimation of Annexure – H is being given to department. Needless to mention that the process to obtain the Ex-India leave is the same as before.

For benefit of all, a copy of simplification of passport rules and the Annexure – H is being attached along with this letter.

Thus, please do not send any files or application for passport NOC henceforth and simply give an intimation in Annexure – H.

This is for information of all please.

A. Documents in support of proof of Date of Birth

As per the extant statutory provisions of the Passport Rules, 1980, all the applicants born on or after 26/01/1989, in order to get a passport, had to, hitherto, mandatorily submit the Birth Certificate as the proof of Date of Birth (DOB). It has now been decided that all applicants of passports can submit any one of the following documents as the proof of DOB while submitting the passport application:

(i) Birth Certificate (BC) issued by the Registrar of Births & Deaths or the Municipal Corporation or any other prescribed authority whosoever has been empowered under the Registration of Birth & Deaths Act, 1969 to register the birth of a child born in India;

(ii) Transfer/School leaving/Matriculation Certificate issued by the school last attended/recognized educational board containing the DOB of the applicant;

(iii) PAN Card issued by the Income Tax Department with the DOB of applicant;

(iv) Aadhaar Card/E-Aadhaar having the DOB of applicant;

(vi) Driving license issued by the Transport Department of concerned State Government, having the DOB of applicant;

(vii) Election Photo Identity Card (EPIC) issued by the Election Commission of India having the DOB of applicant;

(viii) Policy Bond issued by the Public Life Insurance Corporations/Companies having the DOB of the holder of the insurance policy.

(i) The online passport application form now requires the applicant to provide the name of father or mother or legal guardian, i.e., only one parent and not both. This would enable single parents to apply for passports for their

children and to also issue passports where the name of either the father or the mother is not required to be printed at the request of the applicant.

(ii) The total number of Annexes prescribed in the Passport Rule, 1980, has been reduced to 9 from the present 15. Annexes A, C, D, E, J, and K have been removed and certain Annexes have been merged.

(iii) All the annexes that are required to be given by the applicants would be in the form of a self declaration on a plain paper. No attestation/swearing by/ before any Notary/ Executive Magistrate/ First Class Judicial Magistrate would be henceforth necessary.

(iv) Married applicants would not be required to provide the erstwhile Annexure K or any marriage certificate.

(v) The passport application form does not require the applicant to provide the name of her/his spouse in case of separated or divorced persons. Such applicants for passports would not be required to provide even the Divorce Decree.

(vi) In case of children not born out of wedlock, the applicant for the passport of such children should submit only extant Annexure C while submitting the passport application.

(vii) In case of issue of passport to in-country domestically adopted children, submission of the registered adoption deed would no longer be required. In the absence of any deed to this effect, the passport applicant may give a declaration on a plain paper confirming the adoption.

(viii) Sadhus/ Sanyasis can apply for a passport with the name of their spiritual Guru mentioned in the passport application in lieu of their biological parent(s) name(s) subject to their providing of at least one public document such as Election Photo Identity Card (EPIC) issued by the Election Commission of India, PAN card, Aadhaar Card, etc wherein the name of the Guru has been recorded against the column(s) for parent(s) name(s).

(ix) Orphaned children who do not have any proof of DOB such as Birth Certificate or the Matriculation Certificate or the declaratory Court order, may now submit a declaration given by the Head of the Orphanage/Child Care Home on their official letter head of the organization confirming the DOB of the applicant.

(xi) Passports can be now obtained under the ‘Tatkaal’ Scheme without providing the Verification Certificate from a Gazetted Officer, which was required earlier. The documents to be submitted for getting a passport under this Scheme have been notified vide G.S.R. 39(E) dated 11 January, 2018.

(xii) Passports can now also be obtained under the Normal scheme on out-of-turn post-Police Verification basis without paying any additional fees on the submission of certain documents as notified vide G.S.R. 39(E) dated 11 January, 2018.

Subject: Prior Intimation for Submission of Passport Application.

Note: The Prior Intimation Letter (under this Annexure) shall be accepted by the Passport Authority for processing the passport application if the same bears the signature and seal of the employer of the applicant acknowledging its receipt.