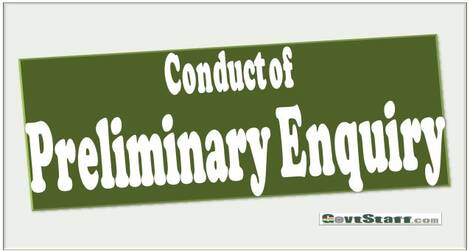 (a) Vigilance Manual 2017 and subsequent amendments made through various CVC circulars.

(b) Handbook for Inquiry Officers (IOs) and Disciplinary Authorities (DA) 2013.

2. The Vigilance Manual 2017 and Swamy’s handbook on CCS (CCA) Rules prescribe the procedure for processing Vigilance cases. Yet it is observed with concern that CEs Command are either not following the stipulated procedure or are referring the cases for clarification, on issues which have been very clearly spelt out in the ibid manual/ Swamy’s handbook along with corresponding CVC/ DoP&T instr, thereby delaying the disciplinary cases, and drawing flak from MoD.

3. It is also observed that over a period of time a number of policy changes have been made by different agencies, which has also resulted in certain conflict in the understanding of the essence of the matter. Therefore, following clarifications are issued for uniformity in understanding the implementation of the procedures for administration of discipline & vigilance mechanism.

4. A SCOI/ TBO/ B of I/One man Enquiry/Technical inspections/ Investigation of a complaint, deviations/faults observed during technical inspections/surprise checks/vigilance checks etc are all different means to gather info/evidence whether any lapses have been committed or not. It generally involves collection of documents and other evidences, obtaining statement of witnesses, their verification and scrutiny to bring out the facts. Thus all of these can be classified as PE. A SCOI is conducted by the staff authorities in Army/Navy/Air force and a TBO/OMI etc can be convened based on the directions of E-in-C’s Br/CEs Command/Zone/CWE etc.

5. CVC Manual 2017 and Swamy’s compilation of CCS(CCA) Rules bring out in detail the steps required to be taken by an Inquiry Officer/ Convening authority while conducting the preliminary investigation (TBO, BOO, OMI etc). Some of these are:-

(a) Taking custody of relied upon documents in original which establish the lapses and substituting these by its duplicate, in order to avoid tampering and destruction of evidence.

(b) Interrogation of other employees of the department and taking written statements duly signed by them and verifying these from record/site visits before finalization of the investigation report.

(c) Temporary transfer/relocation of the employees under investigation locally till completion of the investigation, if required. Approval of the competent authorities must be obtained (Especially in cases of executives, stock holders etc).

(d) Making site inspections, taking photographs and videos and ensuring that the evidence found there, in support of the allegations, is not disturbed/destroyed.

(e) Ensuring Presiding Officers/ members for investigation have not dealt with the work/project/matter under investigation. QS&C cadre must be appropriately included in all contract related investigations.

(f) Scientific tools readily available in the market must be used to aid investigations.

(g) Version of the delinquent officials must be taken before finalizing the investigation except in cases as under (Refer 5.5. 1h (i) of Vigilance Manual):-

(i) Wherever decision to institute departmental proceedings are to be taken without any loss of time due to an impending retirement/superannuation of the official.

(ii) Wherever the facts are not in dispute.

(iii) Wherever the official is not traceable or is not responding to official communication deliberately.

(h) The investigation report must contain material evidence to controvert the defence of the blameworthy officials. It must clearly bring out the lapses duly quoting the extant rules/ regulation/norms/instructions which have been violated, against each of the lapses. The relied upon documents must indicate the lapse/ the corresponding rule that has been violated (eg paras of Contract Manual, RMES, E-in-C’s standing instructions, DWP, Financial Regulations etc).

(j) The investigation report must contain the version of the officials or opportunities accorded to them (max twice).

(k) The investigation report must contain the list of blameworthy officials and their correct and verified service particulars to incl MES number, date of retirement, permanent address, nic email ID and mobile number.

(l) The cases which have been referred from E-in-C’s branch for investigation must be forwarded to this office along with investigation report containing CE Command’s recommendations even if a case is to be closed. These cases shall not be closed without concurrence of E-in-C.

PROCEDURE FOR OBTAINING VERSION OF THE OFFICERS FOUND RESPONSIBLE FOR LAPSE IN PE.

ACTION UPON COMPLETION OF PE.

7. Upon receiving the completed SCOI with directions of Fmn Cdr, the CE Comd must immediately process the disciplinary cases of civilian officials found blameworthy in the SCOI. There is no requirement of carrying out of an investigation on the same matter through TBO. Disciplinary folders of cases involving Gp A or Gp B or composite cases involving both Gp A or Gp B and others must be fwd to E-in-C’s Br for First Stage advice of CVO/CVC.

8. The convening auth shall complete the TBO proceedings within stipulated period of time and prepare disciplinary folders in respect of officials held blameworthy and process the same to next higher authority alongwith appropriate comments / recommendations.

9, Composite cases must not be segregated. If any blameworthy official is retiring shortly then the approval of E-in-C’s Branch will be taken to separate his case. The date of retirement of all the blameworthy officials must be established at the conclusion stage of the PE itself so as to expeditiously process the disciplinary cases.

10. The policy on procedure for conduct of enquiry/investigation into MES works/ services matters by service HQs and action thereupon have been amended recently vide letter mentioned at para 1(e). This should normally be referred for processing all such cases where disciplinary action is pending as on date(incl all such TBOs which have established blameworthiness in respect of MES officials and have been kept pending for want of directions of SCOI), with following additional caveats :-

(a) Version of the delinquent officials be sought except in cases as under:-

(i) Wherever decision to institute departmental proceedings are to be taken without any loss of time due to an impending retirement / superannuation of the official.

(ii) Wherever facts/ material evidences available as are not in dispute.

(iii) Wherever the official is not traceable or is not responding to official communication deliberately.
(iv) Where the SCOI has been completed and the blameworthy officials have participated and have given their statements duly signed which are already incl in the findings of the SCOI.

(b) All cases involving Gp B officials with vigilance angle shall be forwarded for 1st stage advice of CVO as per CVC manual.

11. It may be appreciated that the need for obtaining version of the officer is to accord an opportunity to him/her to present his/her defence. Hence the lapses spelt out in the TBO in its findings must be fwd to the blameworthy officer to obtain his/her version. It is not mandatory to provide relied upon documents at this stage to the officer. However, if the officer desires to peruse the documents he may do so under his own arrangements within the time limit of 15 days accorded to him. The offr may present himself during the conduct of PE to offer his statement or may send it in writing to the Presiding Offr of the PE. The version of the offr will be examined to arrive at the findings or to carry out further investigation, if required.

(a) The PE will be conducted and concluded including recommendation of the convening authority within the under mentioned time schedule:-

(b) Additional time for high value and tech complex nature of works like runway, STP, desalination plant, jetties etc to be specified by convening authority in the convening order at the time of issue.

(c) It may be appreciated and disseminated to all concerned that delay in finalization of PE shall invite disciplinary action against the delinquent officials responsible for the non-finalization of PE as per the time schedule mentioned above.

13. It is learnt that action on a number of finalized TBOs ( by the convening authority) are pending on account of directions contained in E-in-C’ Br letter letter No 78650/Gen/E1D/SC dt 29 May 2003, which mandated conduct of SCOI for initiation of any disciplinary action against the delinquent officials where both military and civilian officials were involved. It is Clarified that if the TBO or any other PE has indicated lapses on part of civ officials, then the chain of command must process the case without awaiting outcome of SCOI. Similarly, if a SCOI brings out lapses by Civ officials, the chain of command must process the case w/o mandatory ordering another TBO or any other form of PE. Version of the officer may be sought if C of I has not recorded his statement.

14. It may also be noted that CVC Vigilance Manual 2017 and various connected Clarifications/ modifications and Handbook for Inquiry Officers and Disciplinary Authorities 2013 are available in open domain. Officers handling D&V matters/IOs/POs must be encouraged to go through its contents for expeditious finalization of disciplinary cases.

15. It is seen that MES offices are in the habit of seeking clarifications on mundane issues, without any application of mind. It must be remembered that policies are broad guidelines and can’t cover every eventuality. Lower HQ must take decisions in the best interest of the organization. Time is of the essence in the PE stage and unnecessary delay leads to subversion of the system. Hence endeavour must be to expedite the PE and not delay it by falling prey to the manipulations of the suspect officials and seeking clarifications through routine correspondence.