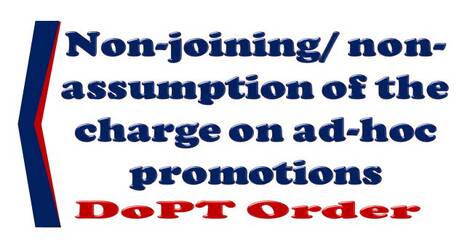 The order of ad-hoc promotion to the Grade of Deputy Secretary of Central Secretariat Service in respect of the 174 Under Secretaries was issued vide this Department’s Order of even number dated 11.12.2020. Further, instructions were issued vide this Department’s Office Memorandum No. 5/10/2020-CS.I(U)Pt. dated 18.12.2020 & 19.12.2020 to concerned Ministries/Departments/Cadre Units to issue instructions to the promoted officers in all grades to assume the charge immediately and not later than 21.12.2020 failing which the promotion orders with respect to non-joinee officers will be liable to be withdrawn, apart from debarment from ad-hoc promotion or other suitable consequences.

2. These ad-hoc promotions were resorted to as a special dispensation for ensuring efficiency in Government’s functioning and to address the urgent requirement of various cadre units for manpower at various levels. Presently 8 Under Secretaries have still not joined/ assumed the charge of the post of Deputy Secretary.

3. The non-joining/non-assumption of the charge to the promotional post tantamounts to unwillingness to accept the offer of promotion. Accordingly, the order of ad-hoc promotion to the Grade of Deputy Secretary in respect of the following 8 Under Secretaries of CSS issued vide order of even number dated 11.12.2020 are hereby cancelled:

Further, since the above mentioned officers have refused to accept ad hoc promotion/ failed to assume the charge of the post within the stipulated time limit, they are hereby debarred from consideration for ad hoc promotion to the grade of Deputy Secretary for a period of one year from the date of issue of promotion orders, i.e. from 11.12.2020.

6. This issues with the approval of Competent Authority.