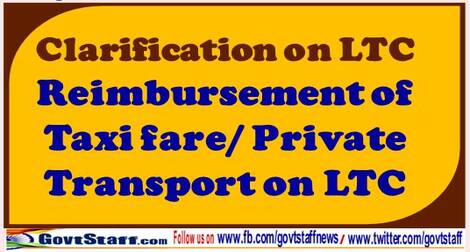 Clarification on LTC – Reimbursement of Taxi fare/ Private Transport separately for a total of 200 Kms (to and fro) reg.

Clarification on LTC – Reimbursement of Taxi fare/ Private Transport separately for a total of 200 Kms (to and fro) reg.

No. 31011/3/2015-Estt.(A.IV)
Government of India
Ministry of Personnel, Public Grievances and Pensions
Department of Personnel and Training
Establishment A-IV Desk
***

The undersigned is directed to refer to para (c) of this Department’s O.M. of even number dated 09.02.2017 on the subject noted above regarding reimbursement in cases where a Government servant travels on LTC upto the nearest airport/ railway station/ bus terminal by authorized mode of transport and undertakes rest of the journey to the declared place of visit by private transport/ own arrangement (such as personal vehicle or private taxi etc.).

3. With regard to the above provision, many references are received in this Department seeking following clarifications:-

5. As regards the second situation described in para 3(ii) above, it is stated that in cases where members of the family avail LTC separately, they shall also be eligible for reimbursement of taxi fare/ private transport separately as per DoPT’s O.M. No. 31011/3/ 2015-Estt.A-IV dated 09.02.2017.

(Satish Kumar)
Under Secretary to the Government of India