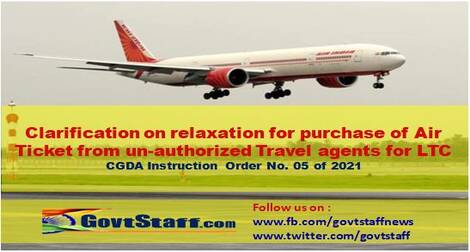 Relaxation for purchase of Air Ticket from unauthorized Travel agent for LTC – CGDA Instruction Order No. 05 of 2021

Relaxation for purchase of Air Ticket from unauthorized Travel agent for LTC – CGDA Instruction Order No. 05 of 2021

Clarification regarding relaxation for purchase of Air Ticket from unauthorized Travel agent for the purpose of LTC.

2. DOP&T vide their OM No. 43020/2/2016/Estt (A.IV) dated 19 Feb 2020 has granted one time relaxation to such Govt. employees who had availed LTC by air to visit J&K and NER during January 2010 to June 2014 and booked the tickets through travels agents other than authorized, due to the lack of awareness of rules. Such relaxation has been granted to the concerned individual after he/she has obtained the concurrence of Financial Advisor of the concerned Ministry/Department.

Read also |  Queries being received in respect of Special Cash Package equivalent of Leave Travel Concession Fare for Central Government during the Block 2018-21 (FAQ No.2) - DoT Circular No. 149

3. Since the powers to grant relaxation to travel by airlines other than Air India were delegated by MoD to PIFAs/IFAs not below the level of SAG vide OMs No. 34/PCPA/Cor/Fin/MO/2016 dated 14.06.2016 and 21.06.2016 and accordingly HQrs IFA Wing Instruction Order No. 08 dated 2016 and subsequent amendments issued time to time, PIFAs and all SAG level IFAs (Dedicated/Nominated) will also deal with the aforesaid cases relating to officers/officials including Defence Civilian Officers/officials posted in the units/formation falling under the jurisdiction the said PIFAs/SAG level IFA offices.

4. Ministry of Defence (Fin) has advised that IFAs, being representatives of MoD (Fin) scrutinize such proposals received in their offices strictly in terms of aforesaid DOP&T OM dated 19.02.2020 so that only justified cases are submitted for kind consideration of FA(DS).

This issues with the approval of Addl. CGDA(Finance).