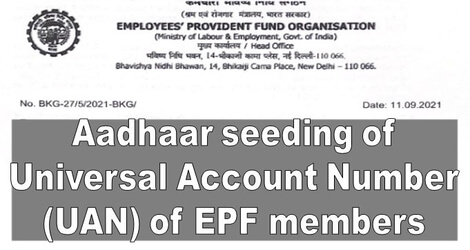 Please refer to SO 1730 (E) dated 30.04.2021 vide which the 3rd day of May, 2021 was appointed as the date on which the provisions of Section 142 of the Code on Social Security shall come into force. The said Section 142 mandates that the identity of an employee for the purpose of registration as a member or beneficiary for withdrawal of fund or for receiving any benefit under any Scheme must be established through Aadhaar number.

You are aware that the employees joining EPFO registered establishments on or after 1st October 2017 have Aadhaar seeded UANs as per Notification S.O. 26 (E) dated 04.01.2017 issued under Section 7 of The Aadhaar (Targeted Delivery of Financial and Other Subsidies, Benefits and Services) Act, 2016. Further, online e-KYC service for Aadhaar seeding of UANs allotted prior to 01.10.2017 is available to both employers and employees on EPFO’s Portal & through UMANG APP & any withdrawals from member’s a/c is allowed only if UAN is Aadhaar seeded. Therefore, after allowing sufficient time of almost four years for Aadhaar seeding, EPFO issued instructions dated 01.06.2021 cited 1 above mandating that UANs is to be Aadhaar seeded for receipt of contributions through ECR.

However, considering the challenges faced by the employers & employees in expeditious seeding of Aadhaar in UANs particularly in view of corrections required in Aadhaar data of employees in aftermath of second wave of Pandemic, the EPFO with prior approval of the Central Government extended the time for mandatory seeding of Aadhaar in UAN for filing ECR up to 01.09.2021 which was communicated vide reference cited 2 above.

The representations for extension of time beyond 01.09.2021 have been considered and it is noted that overall about 94% of contributory EPF members’ UAN have Aadhaar seeding but there is less percentage of Aadhaar seeding in UANs of contributory members in EPFO’s administrative Zone of North Eastern Region and in certain class of establishments / industries such as Beedi making, Building & Construction and Plantation. Since Aadhaar seeding is mandatory for any withdrawals, receipt of contributions in Aadhaar seeded UANs helps members to file online claims to avail withdrawals & file e-nominations without employer’s intervention & avoids delay in withdrawals due to non-seeding of Aadhaar in UAN.

Now therefore, considering the foregoing, it is hereby decided as under:

Read also |  EPFO: Fixation of Pay on grant of MACP - Extension of the benefit of entry level pay provided in DoE’s OM dated 28.9.2018

It is further directed that the Zonal Offices shall ensure that Regional Offices & District Offices facilitate and coordinate with UIDAI to organize camps for Aadhaar enrollment and corrections in Aadhaar data of EPF members to facilitate Aadhaar seeding in UANs and monitor the progress on weekly basis.

(This issues with the approval of the Competent Authority)

EPFO 47 Aadhaar 4 EPFO 60
Newer Post
List of Empaneled Hospitals on the basis of their Consent Delhi / NCR – NVS Hqrs.
Older Post
An employee can not insist to transfer at a particular place – Supreme Court