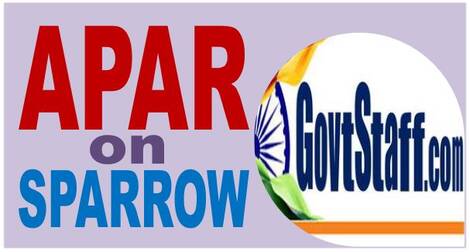 Subject:- Timely completion of APARs as per the timelines of the DoPT by Group A & Group B Officers of the Income Tax Department – reg.

2. In order to reduce APAR deficiencies which were one of the main reasons for delay in holding DPCs, the CBDT with the approval of Competent Authority has migrated to the SPARROW portal to ensure timely completion of APAR cycles. However, it is seen that a number of APARs still remain pending for the following reasons:

This has resulted in delay in completion of APAR cycles.

3. Recently, the DPCs/Screening Committees have taken an adverse view that a large number of NRCs are drawn in respect of IRS(IT) Officers due to non-reporting or non­ reviewing of APARs by the Reporting Officers/Reviewing Officers on time or delayed submission of self-appraisals by the ORUs.

5. As per the above instructions, the duties/responsibilities of the various officers/sections regarding APARs shall be as under:

Table A : Responsibilities of the Officer Reported Upon (ORU):

Table B: Responsibilities of the Reporting Officer:

Table D: Responsibilities of the Primary Custdian /Alternate Custodian I the APAR section:

*The details to be mailed to HRD at email id: [email protected] .gov.in.

2. The stage at which an officer becomes a “Defaulting Officer” along with actions to be taken is further clarified as under:

Table E: Summary of actions as per various situations

7. For any other circumstances in which NRCs are to be issued, the extant DoPT guidelines shall

8. It is once again reiterated that from the Reporting Year 2021-22 onwards, the option of “FORCE FORWARING” of APAR will be applied on SPARROW, and action as proposed in above paras would be taken on the officers who fail to perform their public duty regarding APARs . Whenever the Primary Custodian will force forward the APAR to the next stage, it is mandatory for the Primary Custodian to mention reasons of force forwarding in detail in the remarks section there.

9. Reminders will be placed on irsofficersonline and also through SMSs to inform officers to follow the timelines as provided by DoPT.

10. This issues with the approval of the Chairman, CBDT.