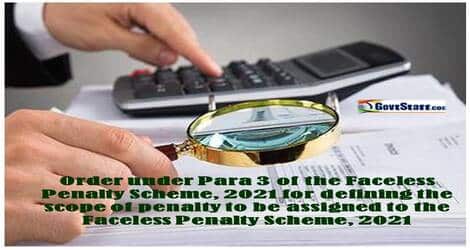 In partial modification of the Order of even number dated 20th January, 2021 as further clarified by Order of even number dated 26th February, 2021, the Board in exercise of powers under Para 3 of the Scheme, hereby directs that in addition to exceptions provided in the above said Orders, the following class of penalties shall remain outside the purview of the Scheme:-

Penalty proceedings in cases where pendency could not be created on ITBA because of technical reasons or cases not having a PAN, as the case may be.

2. In further modification, it is directed that the Orders of even number dated 20th January, 2021 and 26th February, 2021 under Para 3 of the Scheme shall be applicable in respect of penalties imposable under Chapter XXI of the Act, except for the exclusions provided in the said Orders and Para 1 above.

3. This order comes into effect immediately.