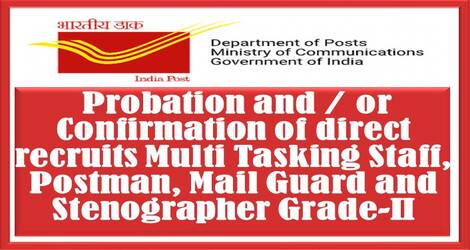 F.No.W-17/31/2021-SPN-I-DOP
Government of India
Ministry of Communications
Department of Posts

3. Currently direct recruits PAs/SAs officials undergo institutional / induction training at the Postal Training Centres (PTCs)/ Regional Training Centres (RTCs) where they have to obtain minimum marks as prescribed by Training Division, in the tests for successful completion of mandatory training, which is pre-requisite for confirmation.

Read also |  Deferment of proposed roll out of CBS-CTS Integration solution on 23.08.2021

4. In line with the above, following instructions shall be taken into account for successfully completion of probation and / or confirmation in case of direct recruits MTS, Postman, Mail Guard and Stenographer Grade-II: –