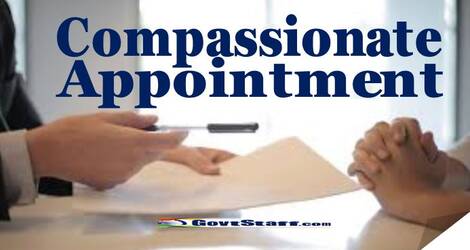 This Ministry has adopted a modified policy for appointment on Compassionate basis in line with the guidelines issued by DoP&T vide its OM No.43019/9/2019-Estt.(D) dated 23.08.2021. You are requested to put the same out in public domain by publishing it on MHA website in ‘WHAT’S NEW’ section and in ‘Policies and Guidelines’ in ‘Documents’ section.

The object of the Compassionate appointment Scheme is to grant appointment on compassionate grounds to a dependent family member of a Government servant dying in harness or who is retired on medical grounds, thereby leaving his family in penury and without any means of livelihood and relieve the family of the Government servant concerned from financial destitution and help it get over the emergency. The relevant guidelines in this regard have been laid by DoP&II vide its OM No. 14014/02/20212-Estt.(D) dated 16.01.2013.

2. DoP&T vide its OM No.43019/9/2019-Estt.(D) dated 23.08.2021 laid down additional guidelines to bring out more transparency and objectivity in the process of Compassionate appointment. To give effect to this, various measures like chalking out role of Welfare Officer, adopting a point based merit scheme for assessing applications, indexing each application with a unique ID and putting out minutes of meeting of the Screening Committee in public domain were stipulated.

3. The Welfare Officer will assist the dependent family of the deceased Government employee in getting appointment on compassionate grounds. The applicant would be called in person at the very first stage and advised in person about the requirements and formalities to be completed. A duly filled proforma by the applicant shall be used to ascertain necessary information and processing the cases of compassionate appointment.

4. The applications for compassionate appointment shall be considered by a Committee consisting of three officers — one chairman and two members – of the rank of Deputy Secretary/ Director in the Ministry. The Welfare Officer may also be made one of the members/ chairman of the Committee, depending on his rank. Recommendation of the committee shall be placed before the Competent Authority for a decision.

5. Transparency and objectivity are the foremost aspects of scheme for compassionate appointment. A holistic assessment of the financial condition of the family has to be made taking into consideration factors like presence of earning member(s), size of family, age of children and the financial needs of family.

6. The extant position regarding appointment on compassionate basis in this Ministry has been reviewed and it has been decided by the Competent Authority that to ensure utmost transparency, a point based merit scheme based on various attributes indicated in the guidelines of DoP&T should be worked out on a 100 point-scale as laid down in Annexure-I.

7. While applying point based merit scheme, as mentioned in Annexure-I, if situation arises that some candidates secure equal marks in merit and Cadre Controlling Authority is unable to decide the merit of such candidates, in such cases the tie-breaking factor can be income available per dependent i.e. total of first three financial parameters prescribed in Annexure-I (Pension annualized, total terminal benefits and annual income of earning members and income from property) divided by total number of dependents. The lesser the per dependent available income, the higher the rank amongst the applicants whose scores had a tie.

9. Keeping in view the administrative requirement in processing applications for compassionate appointment, the form as in Annexure-II may be used for ascertaining necessary information which consists of three parts as under:

10. Point based merit scheme imparts the necessary objectivity, homogeneity and transparency to the scheme for appointment on compassionate grounds. Henceforth, it shall be followed strictly along with the instructions issued by DoP&T time to time, for assessing comparative merit of the applicants for compassionate appointment.

Based On 100 Point Scale For Part-C of Annexure-II

(viii) If Wife of the deceased Govt. official has applied for compassionate appointment for herself.

(ix) If one or more person(s) amongst the dependent family members is disable.

FORM FOR SEEKING COMPASSIONATE APPOINTMENT BY DEPENDENTS OF GOVERNMENT SERVANT DECEASED WHILE IN SERVICE/ RETIRED ON MEDICAL GROUNDS.

1. I hereby declare that the facts given by me above are, to the best of my knowledge, correct. If any of the facts herein mentioned are found to be incorrect or false at a future date, my services may be terminated.

2. I hereby also declare that I shall maintain properly the other family members who were dependent on the Government Servant / member of the Armed Forces mentioned against 1(a) of Part-A of this form and in case, it is proved at any time that the said family members are being neglected or not being properly maintained by me, my appointment may be terminated.

(TO BE FILLED IN BY OFFICE IN WHICH EMPLOYMENT IS PROPOSED)