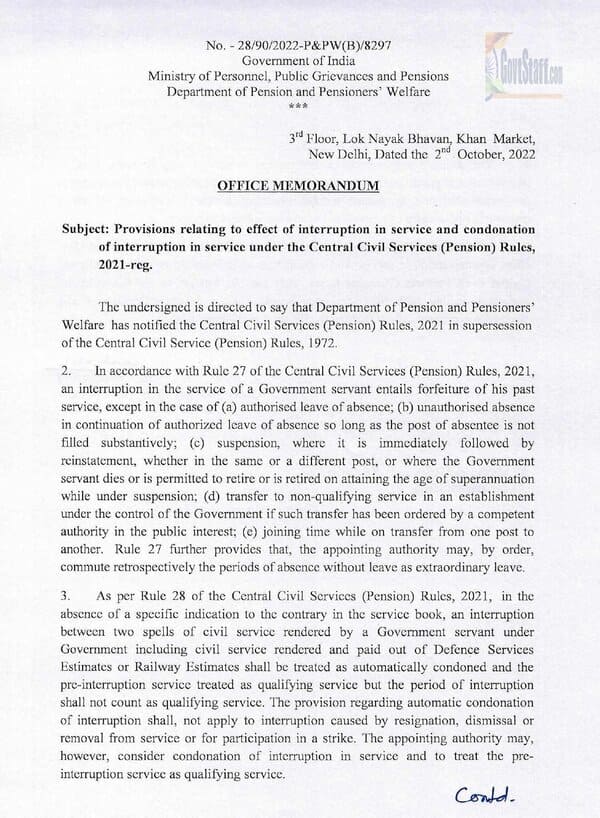 No. – 28/90/2022-P&PW(B)/8297
Government of India
Ministry of Personnel, Public Grievances and Pensions
Department of Pension and Pensioners’ Welfare

2. In accordance with Rule 27 of the Central Civil Services (Pension) Rules, 2021, an interruption in the service of a Government servant entails forfeiture of his past service, except in the case of (a) authorised leave of absence; (b) unauthorised absence in continuation of authorized Icave of absence so long as the post of absentee is not filled substantively; (c) suspension, where it is immediately followed by reinstatement, whether in the same or a different post, or where the Government servant dies or is permitted to retire or is retired on attaining the age of superannuation while under suspension; (d) transfer to non-qualifying service in an establishment under the control of the Government if such transfer has been ordered by a competent authority in the public interest; (c) joining time while on transfer from one post to another. Rule 27 further provides that, the appointing authority may, by order, commute retrospectively the periods of absence without leave as extraordinary leave.

5. All Ministries/Departments are requested that the above provisions regarding effect of interruption in service and condonation of interruption in service under the Central Civil Services (Pension) Rules, 2021 may be brought to the notice of the personnel dealing with the pensionary benefits in the Ministry/Department and attached/subordinate offices thereunder, for strict implementation.

(S. Chakrabarti)
Under Secretary to the Govt. of India 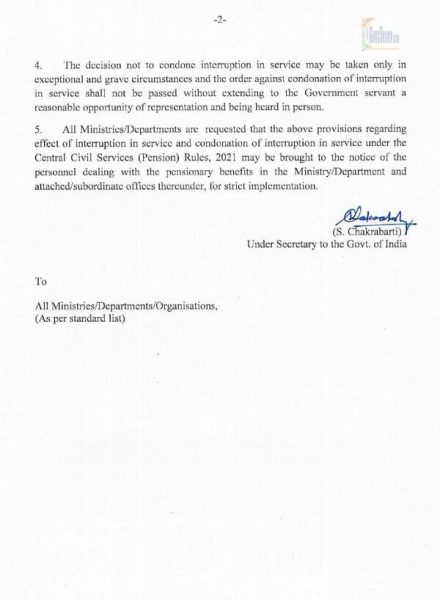