Rounding off the qualifying service for the purpose of Post Retirement Complimentary Pass (PRCP) facility to serving and retired Railway employees – RBE No. 168/2022

Rounding off the qualifying service for the purpose of Post Retirement Complimentary Pass (PRCP) facility to serving and retired Railway employees – RBE No. 168/2022

Sub: Incorporation of provision for rounding off the qualifying service for the purpose of Post Retirement Complimentary Pass (PRCP) facility.

As per extant Railway Servants (Pass) Rules-1986 (Second Edition-1993) [RSPR-1986]. qualifying railway service of 20 years is a mandatory requirement to become eligible for PRCP facility. Requests were received from some railway employees who were otherwise eligible but could not get PRCP facility on account of shortfall in qualifying service ranging only from 15 days to one month. References in this regard were also received from SER & WCR.

2. In order to give relief in such cases, it has been decided to make good the shortfall upto 03 months, by incorporating a provision in RSPR-1986 for rounding off the qualifying service above 19 years and 09 months as 20 years. Accordingly, Competent Authority has accorded approval for amending Col.1 of Schedule-I’V (Post Retirement Complimentary Pass) of RSPR-1986, as follows:-

3. In addition to serving railway employees, the benefit of aforesaid amended provision is also admissible to all retired railway employees, irrespective of the date of retirement, if otherwise eligible for PRCP facility. The Pass Issuing Authority (PIA) from where such employee retired will process the request in this regard and open PRCP Account. In case of retired railway employees who have now become eligible for PRCP facility but deceased in the interregnum, Widow Pass Account may be opened in the name of eligible member by the respective PIA from where the deceased railway employee retired. The beneficiaries of PRCP/Widow Passes may also be permitted to get their Pass Accounts transferred to the PLA of their choice. PRCP/Widow Pass under the above provision will, however, be issued only from the Calendar Year of opening the Pass Account.

4. In case of lateral entrants, the above provision will be applicable on the final qualifying service arrived by adding half of actual previous non-railway service rendered in the establishments of Central/State Government with the railway service. It may also be noted that requests seeking further rounding off or relaxation in respect of minimum qualifying service will not be entertained on any account.

5. This issues with the concurrence of the Finance Directorate of the Ministry of Railways. 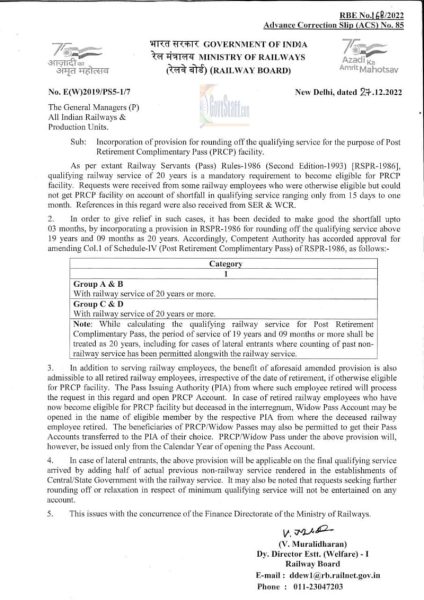