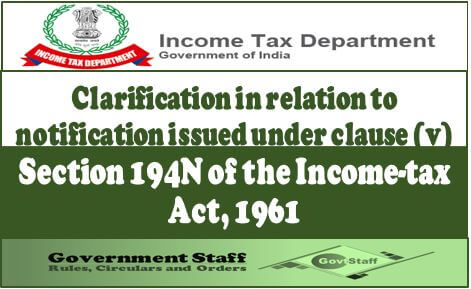 Clarification in relation to notification issued under clause (v): Section 194N of the Income-tax Act, 1961

Clarification in relation to notification issued under clause (v): Section 194N of the Income-tax Act, 1961

Section 194N of the Act as inserted by Finance (No.2) Act 2019 provided for deduction of tax at source on payment made by a banking company, a cooperative society engaged in the business of banking or post office, in cash to a recipient exceeding Rs. 1 crore in aggregate during a financial year from one or more account maintained by such recipient. Clause (v) of proviso to the said section had empowered the Central Government, in consultation with the Reserve Bank of India (RBI), to exempt by way of notification in Official Gazette, persons or class of persons so that payments made to such persons or class of persons shall not be subjected to TDS under this section. Accordingly, in exercise of the said power, Central Government has issued three notifications which are as under:

(a) Notification 68 of 2019 dated 18.09.2019: Cash Replenishment Agencies (CRAs) and franchise agents of White Label Automated Teller Machine Operators (WLATMOs) for the purpose of replenishing cash in ATMs operated by these entities subject to conditions mentioned in the said notification.

(b) Notification 70 of 2019 dated 20.09.2019: Commission agent or trader operating under Agriculture Produce market Committee (APMC) and registered under any law relating to Agriculture Produce Market of the concerned State have been exempted subject to conditions specified in the said notification.

(i) Purchase of foreign currency from foreign tourists or non-residents visiting India or from resident Indians on their return to India, in cash as per the directions or guidelines issued by Reserve bank of India; or

(ii) Disbursement of inward remittances to the recipient beneficiaries in India in cash under Money Transfer Service Scheme (MFSS) of the Reserve Bank of India;

and subject to the conditions specified in the said notification.

2. Section 194N of the Act was amended by the Finance Act, 2020 (the FA, 2020) in order to make the provisions of the said section more stringent for non ITR filers. It is to note that the clause (v) of the proviso to section 194N prior to its amendment has now become fourth proviso to the said section. Representations have been received seeking clarification regarding the validity of the above mentioned notifications in light of the amendments carried out by FA, 2020.