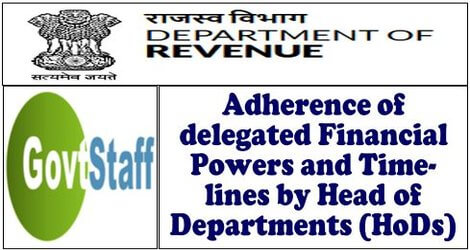 2. As per the said OM, the financial powers upto Rs.60/90 lakhs per annum have been delegated to the Head of Departments of CBDT for ‘Outsourcing of Services” and all HoDs have to follow above OMs. However, several instances have come to the notice of CBDT wherein it has been noted that these OMs are not being followed and HODs are sanctioning expenditure on outsourcing of services beyond their delegated financial powers either by way of entering into fresh contracts or by extending the existing contracts. Subsequently when the ZAOs refuse to clear the bills for want of sanction of the competent authority, proposals are sent to the DIT(Infra) for seeking ex-post facto approval of the competent authority.

Further, in matter of sanctioning of works also, it has come to notice of CBDT that many times field authorities alter/add to the scope of originally sanctioned works beyond their delegated financial powers without prior approval of the competent authority. This has, at times, led to litigation between the contractor and the Department due to delayed payments for want of sanction of the competent authority resulting in levy of interest and cost by the courts.

Therefore, it is hereby reiterated that field authorities Should not sanction expenditure pertaining to ‘Outsourcing of Services” or should not sanction works or add to the sanctioned works beyond their delegated financial powers without taking prior approval of the competent authority.

3. Moreover, it has been observed that proposals seeking ex-post facto approval of the competent authority in cases of renewal /revision of rent agreements, execution of works and outsourcing of services are being sent to this Directorate in a routine manner without any detailed reasons and valid justification for the delay in submitting such proposals. Such ex-post facto approval cases are viewed very adversely by the higher authorities and the IFU.

4. Therefore, I am directed to hereby reiterate that field authorities should not award contracts for outsourcing of services or sanction works beyond the delegated financial powers and also submit the proposals well in time.

5. This is issued with the prior approval of Pr. DGIT(Admin. & TPS).

Copy to: The webmaster for uploading on www.irsofficersonline.gov.in

The delegation of financial powers to Heads of Departments (HoDs) of CBDT and CBEC has been reviewed by the Integrated Finance Unit (IFU) of Department of Revenue. Based on, inter-alia, proposals received from CBDT & CBEC, the revised delegation, duly approved by the competent authority under Rule-13 of the Delegation of Financial Powers Rules, 1978, has been compiled as per Annexure.

2. For exercising the delegated financial powers, as mentioned in the enclosed Annexure, there is no necessity to refer the proposals to the Department/IFU except where proposals are not in consonance with the existing instructions. The provisions of GFRs and instructions issued by the Department of Expenditure and other competent authorities i.e. CVC and DGS&D etc. shall be followed. The expenditure against these delegations is subject to availability of the Funds with the HoDs.

3. The revised delegation, which is applicable with immediate effect, may be circulated to all HoDs.

Note 2: The General Financial Rules, 2005 (effective from 01.07.2005) and the Delegation of Financial Powers Rules, 1978, as amended up to the date of issue of this compilation, shall apply in respect of each of these stated items.

Note 3: Regarding the position on the available delegation of HODs on various items, after issue of Department of Expenditure’s Notification No. 1(11)/E.I1.A/2003 dated 16.9.2003, it is clarified that with the issue of this Notification, the Departments have been authorized to decide the extent of financial powers which they can delegate to their HoDs in the matter of contingent expenditure and miscellaneous expenditure, subject to fiscal codes and procedures and limits being within budgetary allocations. Accordingly, the HoDs of CBDT, CBEC and Department of Revenue will continue to have the same delegation as prevailing before the issue of above notification dated 16.9.2003 unless powers are specifically enhanced under the items in the enclosed compilation.

Note 4: For exercising delegated financial powers as mentioned in the enclosed compilation there is no necessity to refer the proposals to Department/IFU, except where the proposals are not in consonance with the existing instructions.

Note 5: All proposals beyond delegated powers of HoDs are to be invariably referred to the Ministry/ Department for consideration/ approval.