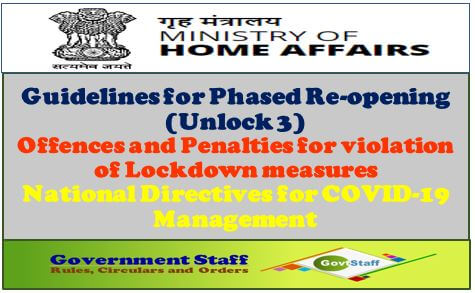 Now therefore, in exercise of the powers, conferred under Section 10(2)(1) of the Disaster Management Act 2005, the undersigned hereby directs that guidelines on Unlock 3, as annexed, will be in force upto 31.08.2020.

1. Activities permitted  during Unlock 3 period  outside the Containment Zones

In  areas  outside  the  Containment  Zones,  all  activities  will  be  permitted, except the following:

(i) Schools, colleges, educational and coaching institutions will remain closed till 31st August, Online/ distance learning shall continue to be permitted and shall be encouraged.

Yoga institutes and gymnasiums will be allowed to function from 5th August 2020 for which, Standard Operating Procedure (SOP) will be issued by the Ministry of Health & Family Welfare (MoHFW).

(iii) International air travel of passengers, except as permitted by MHA.

Dates for re-starting the above activities may be decided separately and necessary SOPs shall be issued for ensuring social distancing and to contain the spread of COVID-19.

Independence day functions at National, State, District, Sub-Division, Municipal and Panchayat levels and ‘At Home’ functions, wherever  held, will be allowed with social distancing and by following other health protocols e.g. wearing of masks. In this regard instructions issued vide MHA letter no 2/5/2020-Public dated 21.07.2020 shall be followed.

National Directives for COVID-19 Management, as specified in Annexure I, shall continue to be followed throughout the country.

(i) Lockdown shall continue to remain in force in the Containment Zones till 31st August, 2020.

(iii) In the Containment Zones, only essential activities will be There shall be strict perimeter control to ensure that there is no movement of people in or out of these zones, except for medical emergencies and for maintaining supply of essential goods and services. In the Containment Zones, there shall be intensive contact tracing, house-to-house surveillance, and other clinical interventions, as required. Guidelines of MoHFW shall be effectively implemented for the above purpose.

(iv) Activities in the Containment Zones shall be monitored strictly by the State/ UT authorities, and the guidelines relating to containment measures in these zones shall be strictly implemented.

(v) States/ UTs may also identify Buffer Zones outside the Containment Zones, where new cases are more likely to Within the buffer zones, restrictions as considered necessary may be put in place by the District authorities.

5. States/ UTs, based on their assessment  of the situation, may prohibit certain activities outside the Containment zones, or impose such restrictions as deemed necessary.

However, there shall be no restriction on inter-State and intra-State movement of persons and goods including those for cross land-border trade under Treaties  with neighbouring countries.  No separate permission/ approval/ e-permit will be required for such movements.

6. Movement of persons with SOPs

Movement by passenger trains and Shramik special trains; domestic passenger air travel; movement of Indian Nationals stranded outside the country and of specified persons to travel abroad; evacuation of foreign nationals; and sign-on and sign-off of Indian seafarers will continue to be regulated as per SOPs issued.

Persons above 65 years of age, persons with co-morbidities, pregnant women, and children below the age of 10 years are advised to stay at home, except for essential and health purposes.

8. Use of Aarogya Setu

(i) Aarogya Setu enables early identification of potential risk of infection, and thus acts as a shield for individuals and the  community.

(ii) With a view to ensuring safety in offices and work places, employers on best effort basis should ensure that Aarogya Setu is installed by all employees having compatible mobile phones.

(iii) District authorities may advise individuals to install the Aarogya Setu application on compatible mobile phones and regularly update their health status on the This will facilitate timely provision of medical attention to those individuals who are at risk.

9. Strict enforcement of the guidelines

(i) State/ UT Governments shall not dilute these guidelines issued under the Disaster Management Act, 2005, in any manner.

(ii)  All the District Magistrates shall strictly enforce the above measures.

Any person violating these measures will be liable to be proceeded against as per the provisions of Section 51 to 60 of the Disaster Management Act, 2005, besides legal action under Sectionl 88 of the IPC, and other legal provisions as applicable. Extracts of these penal provisions are at Annexure II.

1. Face coverings: Wearing of face cover is compulsory in public places; in workplaces; and during transport.

4. Spitting in public places will be punishable with fine, as may be prescribed by the State/ UT local authority in accordance with its laws, rules or regulations.

6. Work from home (WfH): As far as possible the practice of WfH should be followed.

9. Frequent sanitization of entire workplace, common facilities and all points which come into human contact g. door handles etc., will be ensured, including between shifts.

10. Social distancing: All persons in charge of work places will adequate distance between workers, adequate gaps between staggering the lunch breaks of staff, etc.

Offences and Penalties for Violation of Lockdown Measures

51. Punishment for obstruction, etc -Whoever, without reasonable cause–

(a) obstructs any officer or employee of the Central Government or the State Government, or a person authorised by the National Authority or State Authority or District Authority in the discharge of his functions under this Act; or

52. Punishment for false claim -Whoever knowingly makes a claim which he knows or has reason to believe to be false for obtaining any relief, assistance, repair, reconstruction or other benefits consequent to disaster from any officer of the Central Government, the State Government, the National Authority, the State Authority or the District Authority, shall, on conviction be punishable with imprisonment for a term which may extend to two years, and also with fine.

54. Punishment for false warning -Whoever makes or circulates a false alarm or warning as to disaster or its severity or magnitude, leading to panic, shall on conviction, be punishable with imprisonment which may extend to one year or with fine.

55. Offences by Departments of the Government–(1) Where an offence under this Act has been committed by any Department of the Government, the head of the Department shall be deemed to be guilty of the offence and shall be liable to be proceeded against and punished accordingly unless he proves that the offence was committed without his knowledge or that he exercised all due diligence to prevent the commission of such offence.

(2) Notwithstanding anything contained in sub-section (1), where an offence under this Act has been committed by a Department of the Government and it is proved that the offence has been committed with the consent or connivance of, or is attributable to any neglect on the part of, any officer, other than the head of the Department, such officer shall be deemed to be guilty of that offence and shall be liable to be proceeded against and punished accordingly.

56. Failure of officer in duty or his connivance at the contravention of the provisions of this Act.-Any officer, on whom any duty has been imposed by or under this Act and who ceases or refuses to perform or withdraws himself from the duties of his office shall, unless he has obtained the express written permission of his official superior or has other lawful excuse for so doing, be punishable with imprisonment for a term which may extend to one year or with fine.

57. Penalty for contravention of any order regarding requisitioning. –­ If any person contravenes any order made under section 65, he shall be punishable with imprisonment for a term which may extend to one year or with fine or with both.

58. Offence by companies -(1) Where an offence under this  Act  has been committed by a company or body corporate, every person who at the time the offence was committed,  was in charge of, and was responsible to, the company, for the conduct of the business of the company, as well as the company, shall be deemed to  be guilty of the contravention and shall be liable to be proceeded against and punished accordingly:

Read also |  Vaccination of all Central Government employees who have attained the age of 18 years and above: DoP&T OM dated 22.04.2021

Provided that nothing in this sub-section shall render any such person liable to any punishment provided in this Act, if he proves that the offence was committed without his knowledge or that he exercised due diligence to prevent the commission of such offence.

(2) Notwithstanding anything contained in sub-section (1), where an offence under this Act has been committed by a company, and it is proved that the offence was committed with the consent or connivance of or is attributable to any neglect on the part of any director, manager, secretary or other officer of the company, such director, manager, secretary or other officer shall also, be deemed to be guilty of that offence and shall be liable to be proceeded against and punished accordingly.

Explanation.–For the purpose of this section-

(a) “company” means anybody corporate and includes a firm or other association of individuals; and
(b) “director”, in relation to a firm, means a partner in the.

59. Previous sanction for prosecution– No prosecution for offences punishable under sections 55 and 56 shall be instituted except with the previous sanction of the Central Government or the State Government, as the case may be, or of any officer authorised in this behalf, by general or special order, by such Government.

60. Cognizance of offences.–No court shall take cognizance of an offence under this Act except on a complaint made by-

An order is promulgated by a public servant lawfully empowered to promulgate such order, directing that a religious procession shall not pass down a certain street. A knowingly disobeys the order, and thereby causes danger of riot. A has committed the offence defined in this section.