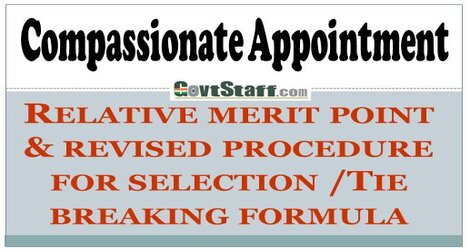 The All Cadre Controlling Authorities
Under CBIC (through CBIC’s website)

Please refer to Board’s letter F.No.A.12012/52/2018-Ad.III B dated 15th May, 2019 wherein a standard operating procedure based on a 100-point scale was circulated for compassionate appointment to ensure transparency and maintain uniformity and to avoid litigation in the selection process.

2. It has been reported to the Board by one CCA that while applying 100 points scale parameters, as mentioned in SOP, some candidates have equal marks in merit and Cadre Controlling Authority is unable to decide the merit of such The matter of tie of marks secured by some candidates has been deliberated in the Board to resolve such situation.

3. After examination the issue in detail, it has been decided that the tie breaking factor can be per dependent available  income i.e. total of first  three financial parameters prescribed in SOP   (Pension­ annualised,   total   terminal benefits and annual income of earning members and income from property) divided by total   number of dependents  (spouse,  parents,  dependent  married/ unmarried/ widowed/divorced daughters, dependent minor children of deceased Government Servant OR dependent sister(s)/ brother(s) of an unmarried deceased Government Servant, unmarried major son below 25 years & dependant major sons who are physically/ mentally  challenged). The lesser the per dependent available income, the  higher  the  rank amongst the applicants whose scores had a tie.

6. Apart from this while deciding the tie breaking factors as mentioned in the preceding paras, based on suggestions received from some Cadre Controlling Authorities, the entries made at point N 7 & 8 in 100-point scale of SOP issued vide letter No. A.12012 / 52/ 2018- Ad.IIIB dated 15.09.2019 shall be substituted by the following entries;

7. The other contents mentioned in original SOP issued vide letter A.12012/52/ 2018-Ad.IIIB dated 15.05.2019 will  remain unchanged. Henceforth, all the concerned are advised to strictly follow weightage points system keeping in view instructions of DoPT & Board issued from time to time.

8. This issued with the approval of Chairman (CBIC).