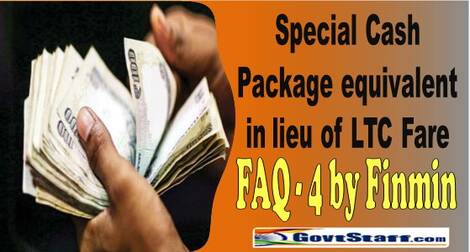 No.12(2)/2020/E-II.A
Government of India
Ministry of Finance
Department of Expenditure

Subject: Clarification regarding queries being received in respect of Special Cash Package equivalent in lieu of Leave Travel Concession Fare for Central Government Employees during the block 2018-21.

The undersigned is directed to say that this Department has been receiving a number of queries relating to Special Cash Package equivalent in lieu of Leave Travel Concession Fare for Central Government Employees during the block 2018-21 announced by the Government on 12th October, 2020. Three sets of Frequently Asked Questions (FAQs) have already been clarified vide this Department’s O.M. of even number dated 20th October 2020, 10th November 2020 and 25th November 2020 on the subject mentioned above.

2. A further set of frequently asked questions have been clarified and are attached herewith at Annexure-‘ A’.

3. This issues with the approval of Competent Authority.

(Sunil Kumar)
Under Secretary to the Govt. of India

All Ministries/Departments of the Government of India.