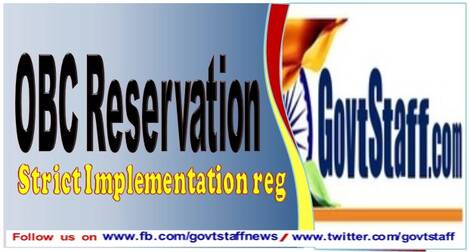 The undersigned is directed to forward herewith a copy of National Commission for Backward Classes’s letter No.NCBC/11/01/38/2021-RW dated 03rd February, 2021 and copy of DoP&T letter No.A36011/1/2013-Estt (Res) dated 23rd January, 2014 on the subject cited above for information and strict compliance.

(Nirmal Kumar Bhagat)
Under Secretary to the Government of India
Tele: 23766903

The Commission has been receiving several complaints, regarding the irregular appointments based on faulty rosters and irregularities in student admissions, by which Socially & Educationally Backward Classes are deprived of their posts & their admissions.

2. The Constitution of India has declared equality of opportunity in the matter of public employment and under Clauses (4) and (4A) of Article 16 of the Constitution, it is declared that nothing in the said Article shall prevent the State from making any provision for reservation of appointments or posts in favour of backward class of citizens, which in the opinion of the State is not adequately represented in the services under the State.

4. Objective of providing reservations to the Backward Classes (OBCs) in Services & admission is not only to give jobs to some persons belonging to these communities, but basically aims sat empowering them and ensuring their participation in the decision making process of the State.

5. In this regard, it is reiterated that Hon’ble Justice B.P. Jeevan Reddy, while delivering the majority judgment in the matter of Indra Sawhney & Ors Vs. UOI & Ors, observed that public employment gives a certain status and power, besides the means of livelihood.

6. This commission constituted under Constitution of India through 102nd Amendment is empowered through Article 338(5) as:

(5) It shall be the duty of the Commission

(a) to investigate and monitor all matters relating to the safeguards provided for the socially and educationally backward classes under this Constitution or under any other law for the time being in force or under any order of the Government and to evaluate the working of such safeguards; and

(c) to make.in such reports the recommendations as to the measures that should be taken by the Union or any Stale for the effective implementation of those safeguards and other measures for the protection, welfare and socio-economic development of the socially and educationally backward classes;

7. Hence, it ix directed that ‘a wide circulation of this directions be made “to all
Ministries/Departments/Institutions running under Central/State governments, and to see effective implementation of OBC reservations in posts &admissions as per the reservations Acts/rules/orders.