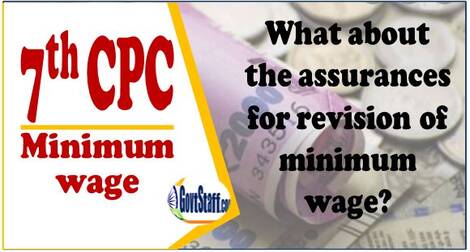 7th Pay Commission: What about the assurances for revision of minimum wage?

7th Pay Commission: What about the assurances for revision of minimum wage?

What about the assurances for revision of minimum wage?
the pioneer, Wednesday, 30 June 2021 | BRURUHASPATI SAMAL

The Central Government has declared unilateral implementation of the recommendations of 7th Central Pay Commission (CPC) without any modifications through a Cabinet decision on June 29, 2016. This was done, despite repeated correspondences with the Prime Minister, Cabinet Secretary and Secretary DoPT and several rounds of country wide agitational programmes including serving of notice to go for nationwide indefinite strike.

The employees have expressed their serious resentment for wrong interpretation and implementation of Dr Aykroyd Formula approved by the Supreme Court of India to determine the minimum need-based wage which was fixed by the CPC at Rs 18,000 instead of Rs 26,000 as demanded.

In addition, abolition of 52 allowances, merger of 36 allowances with Pay, decrease in percentage of the house rent allowance, no change in annual increment / financial upgradations / casual and maternity leave even after a gap of ten years, 20% decrease in pay in the 2nd year of Child Care leave etc. were some of the negative recommendations of the 7th CPC.

The CPC also ignored the demands of the staff side for revision of minimum wage at 3.7 multiplying factor, 5% annual increment, 5 promotions during the entire service career of an employee etc and above all the understanding in between the staff side and Secretary, DoPT for implementation of the recommendations from 01.01.2014.

Read also |  7th Pay Commission Concordance Tables for fixation of notional pay as on 01.01.2016 for JCOS/ORs of Army and Airmen of Air Force, who retired/died in various ranks after implementation of 3 CPC (01.01.1973)

Moreover, both the CPC and the Government avoided the demands of as many as 3 lakh Gramin Dak Sewaks and lakhs of casual and contract workers working in the Central Government establishment. However, due to the strong protest by NJCA, the then Union Home Minister Rajnath Singh, as per direction of the Prime Minister held discussions with the NJCA leaders on June 30, 2016 in the presence of Finance Minister Arun Jaitly and Railway Minister Suresh Prabhu.

The National Joint Council of Action (NJCA), is a united forum of more than 120 independent organizations comprising Confederation of Central Government Employees and Workers along with Railway and Defence Federations.

After hours of discussions on the demands with particular reference to revision in minimum wage and Fitment Formula, the group of Cabinet Ministers, without any written minutes or communications just verbally assured that a high-level committee would be appointed to consider the issues raised by the NJCA which prompted the NJCA to go for nationwide Indefinite Strike from July 11, 2016 as notified earlier. Country wide demonstrations were held daily in front of all offices and at all important centres.

On July 6, 2016 when the NJCA meeting was in progress on the preparations of the proposed nationwide strike, the then Home Minister Rajnath Singh again invited the NJCA leaders for discussion in the presence of Finance, Railway and Communication Ministers.

After hours of discussion with 17 staff representatives of the NJCA, the group of Ministers reiterated the earlier assurances of the Government basing on which the proposed indefinite strike commencing July 11, 2016 was deferred. However, while answering to the Unstarred Question No. 1170 put in this regard in Rajya Sabha, the then Union Finance Minister (State) P Radhakrishnan replied on March 6, 2018 in contradiction to the written assurances of a group of Cabinet Ministers.

He said, “The minimum pay of Rs 18,000 pm and fitment factor of 2.57 are based on the specific recommendations of the 7th Central Pay Commission in the light of the relevant factors taken into account by it. Therefore, no change therein is at present under consideration”. In the meantime, more than 5 years have passed. No action has yet been taken either to constitute the proposed committee nor to have a negotiation with the staff side representatives.

The Confederation of Central Government Employees and Workers has already gone twice for one-day nationwide strike on January 8, 2020 and November 26, 2020 reminding the Central Government of the the discussions and assurances of June 30, 2016 and July 6, 2016 along with demand for 5 years wage revision like banks, insurance and PSUs. But adding salt to the injury, the Central Government has frozen the Dearness Allowance of the employees for 18 months from January 1, 2020 to June 30, 2021 on the plea of Covid-19 pandemic management which is a strong kick of gross injustice on the bread and butter of the employees who are now working in tandem with the Government, administration and the people of the country to fight against Corona. If the written assurances are not kept and DA is not restored immediately, the Confederation and NJCA may once again take a strong decision to go for nationwide agitation culminating to indefinite strike.

(The writer is all India organising general secretary, National Federation of Postal Employees-P-III)

Read at: The Pioneer