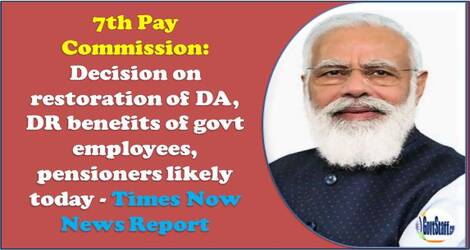 New Delhi: While all eyes will be on the Narendra Modi-led government’s likely Cabinet expansion today, some good news may come for central government employees and pensioners. The Cabinet at its meeting slated for 11 am today may take a final call on restoring the Dearness Allowance (DA) and the Dearness Relief (DR) benefits of central government employees and pensioners respectively as per the seventh pay commission guidelines, reports say.

Earlier, in a meeting on June 26 and June 27 between the Union ministry of finance and the department of personnel and training (DoPT), it was decided that DA and DR benefits will be restored from September this year, Shiv Gopal Mishra, General Secretary of National Council of Joint Consultative Machinery (JCM), who was also present in the meeting had told reporters earlier. However, it was also said that the final call regarding the matter will be taken by the Union Cabinet in its next meeting.

According to Mr Mishra, Cabinet Secretary agreed that the three pending installments of the dearness allowance and DR will be paid in September 2021, including the arrears of July and August 2021. Mr Mishra further added that Cabinet Secretary assured him that the payments will be made expeditiously.

Read also |  Grant of Financial up gradation to Station Master under MACPs in compliance to RBE-26/2020 and RBE-81/2020, Clarification

Meanwhile, the Congress party has also urged the Centre to take a final decision on the DA and DR restoration quickly. The opposition party has accused the Modi Government of being unfair towards government employees and pensioners, including armed forces personnel, regarding the payment of their due DA and DR benefits. Rahul Gandhi alleged that the government took to “looting” Rs 37,500 crore from soldiers, government employees, and pensioners, adding that it is a “crime” amid such times of decreasing salaries and rising inflation.

Last year in January the government had decided to hold the additional instalments of DA and DR of central government employees and pensioners respectively in view of the Covid pandemic. But so far no decision has been taken by the government to restore the above benefits.