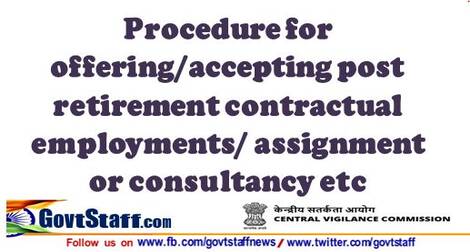 3. The Commission has therefore decided to formulate a defined procedure before engaging a retired government official on contractual/consultancy basis by government organisations. The procedure to be adopted would include the following Steps:-

Read also |  Discontinuation of usage of physical (receipt copy) of Memorandum of remittances ACG 11, 11(a) and vouchers ACG 12, 13 & 14 in the post offices

4. Further, it has been observed that on some occasions, immediately after their retirement from government organisations, retired officials are taking up full time job/contractual assignments in private sector organisations. Quite often, cooling off period, as prescribed under the rules of organisations concerned, is not observed before taking up such offers. Post retirement acceptance of offer by retired government officials without observing cooling off period, constitutes a serious misconduct on their part.

5. All government organisations may, therefore, formulate appropriate rules/guidelines for its employees to ensure that post retirement, cooling off period is mandatorily observed by them before accepting any offer from private sector entities. The rules/guidelines should incorporate procedure for seeking/obtaining permission before accepting offer from private sector entities during cooling off period if not in existence. The applicable service/conduct rules should also be revised/modified to ensure that, if required, appropriate action can also be initiated in case of violation of such rules by retired employees.

6. The above instructions may be noted for strict compliance.

Read also |  Inclusion of HRA, Transport Allowance & SFA for the purpose of calculating Overtime Allowance under the Factories Act, 1948: BPMS