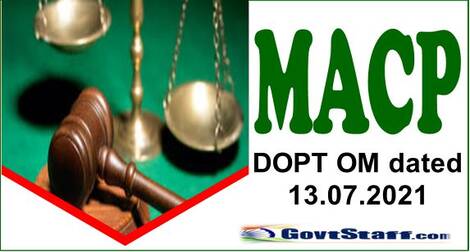 Subject: Cases pending or decided by Hon’ble High Courts/Central Administrative Tribunals regarding preponement of effective date of Modified Assured Career Progression Scheme – Order of the Hon’ble Supreme Court of India dated 28.4.2021 in CA No. 1579/21 (SLP (C) No. 15572/2019) of Union of India v/s R.K. Sharma & others – reg.

The undersigned is directed to say that vide O.M. of even number dated 30.9.2020, Ministries/ Departments were advised to defend all cases or challenge the Orders of Court/Tribunal, as the case may be, which are contrary to Modified Assured Career Progression Scheme (MACPS) guidelines, since the matter relating to preponing the date of effect of the MACPS from 1.9.2008 (as provided in the scheme) to 1.1.2006, was sub-judice in a number of cases pending in the Apex Court, which have been tagged with SLP No. 10811-13/2018 of Uol v/s Ranjit Samuel, and that all similar matters were being heard together.

“7. For a better understanding of the dispute in these cases, it is necessary to examine the judgments of this Court in Balbir Singh Turn (supra) and M.V. Mohanan Nair (supra). The point that was considered by this Court in Balbir Singh Turn (supra) relates to the applicability of the benefit of MACPS from 01.01.2006. The Respondents therein approached the Armed Forces Tribunal which held that the benefit of ACP granted to an employee is part of the pay structure which affects the pay and also his pension. The Armed Forces Tribunal held that an ACP is not an allowance but a part of pay and therefore, in terms of the Government resolution, the employees were entitled for MACP w.ef. 01.01.2006. This Court in Balbir Singh Turn (supra) upheld the said finding recorded by the Armed Forces Tribunal. Instructions issued on 30.05.2011 were found to be contrary to the resolution dated 30.08.2008 as, according to the resolution 01.01.2006 was the effective date for implementation of MACPS in matters relating to pay and dearness allowance.

8. In MV. Mohanan Nair (supra) a three Judge Bench of this Court considered the ACPS as well as the MACPS to hold that the schemes are in the nature of incentive schemes which were brought into force to relieve stagnation. This Court was of the considered view that the Respondents therein were entitled only to the benefit of next grade pay in the pay band and not to the benefit of grade pay of next promotional post. As the MACPS is a matter of Government policy pursuant to the recommendations made by the Pay Commission, this Court refused to accept submissions of the employees that MACPS should be made applicable w.e.f. 01.01.2006.

9. In view of the judgment of this Court in M.V. Mohanan Nair (supra), the Respondents and other similarly situated employees are entitled for financial upgradation under MACPS only to the next grade pay and not to the grade pay of next promotional post. It is clear from the resolution dated 30.08.2008 that the recommendation of the 6th Pay Commission was accepted by the Government and was made effective from 01.01.2006 in respect of civilian employees with regard to revised scales of pay and dearness allowances. In so far as the revised allowances other than dearness allowance, recommendation of the 6th Pay Commission were given effect from 01.09.2008. The judgment in M.V. Mohanan Nair (supra) clinches the issue. Benefits flowing from ACP & MACP Schemes are incentives and are not part of pay. The resolution dated 29.08.2008 is made effective from 01.09.2008 for implementation of allowances other than Pay and DA which includes financial upgradation under ACP & MACP Schemes. Therefore, the Respondents and other similarly situated officers are not entitled to seek implementation of the benefits of MACPS w.e.f. 01.01.2006 according to the resolution dated 29.08.2008. Moreover, the implementation of MACPS by granting financial upgradation only to the next grade pay in the pay band and not granting pay of the next promotional post w.e.f. 01.01.2006 would be detrimental to a large number of employees, particularly those who have retired. We find force in the submission made by the learned Additional Solicitor General that uniform implementation of MACPS for civilian employees w.e.f. 01.01.2006 would result in large scale recoveries of amounts paid in excess.

10. In view of the above, we set aside the judgment of the High Court and allow these Appeals.”

3. Accordingly, in terms of the existing MACP guidelines, and in light of above mentioned order dated 28.4.2021, all Ministries/Departments are, therefore, advised to dispose of all pending grievances seeking grant of benefit w.ef. 1.1.2006 under the MACP Scheme, and also. to defend the various pending Court Cases or to take immediate suitable action for appealing against such judgments which are contrary to the existing policy, as upheld by the Hon’ble Apex Court in the instant case.

All Ministries/Departments of the Government of India.

DoPT Order 222 Court Cases 34 DoPT Circular 21 Latest DoPT Orders 223 MACP 49 Supreme Court 21
Newer Post
Suspension of family pension to a person charged with the offence of murdering: Railway Board Order RBE No. 48/2021
Older Post
First Credit of pension on the basis of e-PPO into the account of the pensioner/family pensioner followed by subsequent verification with physical PPOs