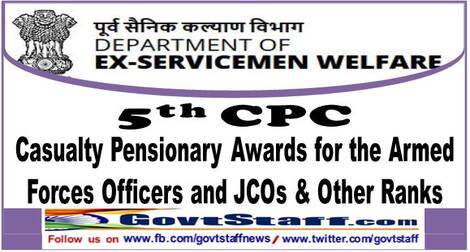 Subject : Implementation of the Government decision on the recommendations of the fifth CPC regarding casualty pensionary awards for the Armed Forces Officers and JCOs & Other Ranks.

The undersigned is directed to refer to this Ministry’s letter No. 1(2)/97/D(Pen-C) dated 31st January, 2001. In terms of Para 4.1 of this letter, various categories have been enumerated for determining the pensionary benefits for death or disability under different circumstances due to attributable or aggravated by military service causes. One of the circumstances enumerated under Category ‘E’ (f) (ii) of the said para of the above mentioned MoD letter is ‘battle inoculation training exercises or demonstration with live ammunition.

3. Para 2 of the MoD letter dated 8tt September, 2009 states that “cases already settled prior to the date of issue of this letter will not be reopened”.

4. The matter has been examined in this Ministry and it has been decided that the flying accidents cases that occurred on or after 01.01.1996 and which fall strictly under six categories mentioned at para 2 above may also be considered for grant of pensionary benefits in terms of MoD letter No. 1(2)/97/D(Pen-C) dated 31.01.2001. Accordingly, Para 2 of the MoD letter No. 1(11)/2006/D(Pen-C)/PC dated 8th September, 2009 stands removed.

5. Service Hqrs./Record Offices concerned are advised to re-examine each such case strictly in accordance with six categories mentioned at para 2 above in consultation with PCDA without any deviation.

(Ashok Kumar)
Under Secretary to the Govt. of India

Copy to:
As per standard distribution list.
DFA(Pension)
CGDA