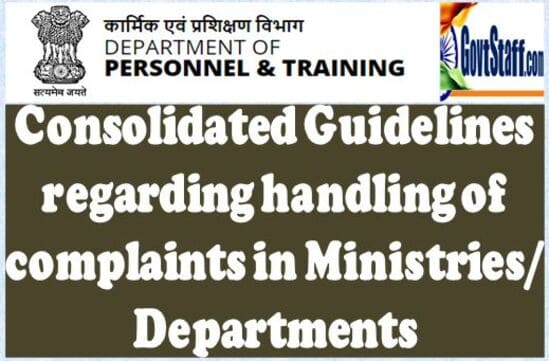 Subject: Consolidated Guidelines regarding handling of complaints in Ministries/Departments.

D/o Personnel & Training (DoPT) has from time to time issued guidelines regarding handling of complaints in Ministries/Departments. An effort has been made to consolidate and update the said guidelines at one place for better understanding and guidance, which are as follows:

2 (i) No action is required to be taken on anonymous complaints, which do not carry both name and address of the complainant, irrespective of the nature of allegations and such complaints need to be simply filed.

(ii) Complaints containing vague allegations could also be filed without verification of identity of the complainant.

3. Instructions contained in para 2 above would also be applicable (with appropriate competent authority to be designated under para 2(iii) above) for dealing with complaints against Secretaries to the Government of India or Chief Executives / CMDs / Functional Director of PSEs/PSBs/FIs, which will continue to be referred to the Cabinet Secretariat for placing before the Group of Secretaries headed by the Cabinet Secretary/Secretary (Co-ordination) in the Cabinet Secretariat, as the case may be, as per procedure given in this OM.

4. Complaints against Secretaries to the Government of India, whether pseudonymous or otherwise, received by the Cabinet Secretariat or the DoP&T or the Prime Minister’s office, will be first scrutinized by the Group headed by the Cabinet The composition of the group shall be as follows:-

a) This Group, after reviewing the complaints, would proceed as follows:-

b) Having received appropriate inputs on the complaints, the group will then proceed in the following manner:-

c) The Group constituted will also be looking into the complaints received by the Cabinet Secretary from CVC under the CVC Act or the Public Interest Disclosure Resolution. The CVC shall be kept informed at regular intervals about the status of the scrutiny/review undertaken by the group into complaints forwarded by the eve.

5. The complaints against officers who do not hold the post of the Secretary, but whose pay-scales are equivalent to that of Secretaries to the Government of India (Secretary Equivalent Position) and who are functioning under an administrative Ministry/ Department (i.e. where there is an administrative superior to such officers) shall be looked into by the concerned Ministry I Department and the matter may be referred to the Cabinet Secretariat (Group of Secretaries headed by Cabinet Secretary) only if it merits further This procedure can be adopted in the case of those officers who have retired from Secretary-equivalent posts too.

(Rupesh Kumar)
Under Secretary to Govt. of India

DoPT Order 318 Complaints 5 Consolidated Guidelines 9 CVC 38 Latest DoPT Orders 328 Vigilance 17
Newer Post
Small Savings Schemes Interest Rate for the 3rd Qtr of FY 2022-23 from 01.10.2022 to 31.12.2022 – Finmin
Older Post
Reservation for Persons with Benchmark Disabilities – Clarification by DoP&T with regard to the concept of own merit