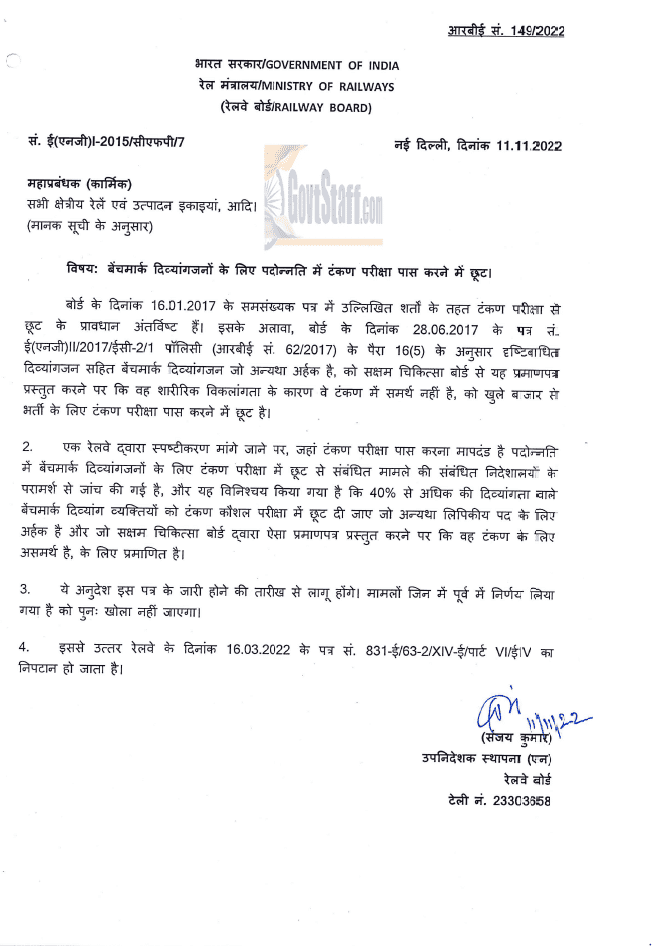 Exemption from passing the Typewriting Test in promotion for PwBDs – RBE No. 149/2022

Exemption from passing the Typewriting Test in promotion for PwBDs – RBE No. 149/2022

Sub: Exemption from passing the Typewriting Test in promotion for PwBDs.

Board’s letter of even number dated 16.01.2017 contains provisions for exemption from typing test under conditions mentioned therein. Further, as per para 16 (5) of Board’s letter No. E(NG)II/2017/EC-2/1 Policy dated 28.06.2017 (RBE No. 62/2017), PwBDs including visually handicapped person who are otherwise qualified, are exempted from passing the type test for recruitment from the open market on production of certificate from a competent Medical Board, that they are unable to type due to their physical disability.

2. On clarification sought by one of the Railways, the matter regarding exemption from typing test to PwBDs in promotion where clearing the type test is a criterion, has been examined in consultation with the concerned Directorates, and it has been decided that, exemption in Typing Skill test may be extended to PwBD candidates with not less than 40% disability who are otherwise qualified to hold clerical post, and who are certified as being unable to type by the competent Medical Board, upon production of such certificate.

3. These instructions will be effective from the date of issue of this letter. Case already decided in the past need not be re-opened.