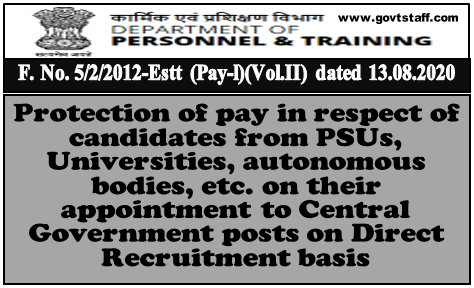 Subject: Protection of pay in respect of candidates from PSUs, Universities, autonomous bodies, etc. on their appointment to Central Government posts on Direct Recruitment basis -reg.

2. On receipt of certain cases seeking clarification as to the exact scope of this Department’s OM dated 07.08.1989 and the conditions under which the benefit under that OM is admissible, this Department vide OM No 12/1/96-Estt. (Pay-l) dated 10.07.1998 clarified that the pay protection under the above orders is available, only if, the selection is through interview and not through an open competitive examination.

3. However, in the light of various court judgments and references received from various quarters, the above mentioned policy of pay fixation of the candidates coming from field sources (PSUs, Universities etc) referred to in para 1, has been reviewed.

4. The President is pleased to decide that notwithstanding the mode of selection, henceforth, the benefit of pay protection will.be available to Direct Recruits appointed in Central Government to those posts for which the relevant Recruitment Rules prescribe a requirement of minimum number of years of experience in a specified area from the field sources (autonomous bodies, PSUs etc.) for appointment under the method of direct recruitment. The benefit will be allowed irrespective of whether the post is filled by the recruiting agency on the basis of interview or open competitive exam or combination of both.

5. This OM will be effective from the date of its issuance.

6. In their application to the employees of Indian Audit and Accounts Department, these orders are issued after consultation with the Comptroller & Auditor General of India, as mandated under Article 148(5) of the Constitution.

(A. K. Jain)
Deputy Secretary to the Government of India

To
All Ministries / Departments of Government of India.