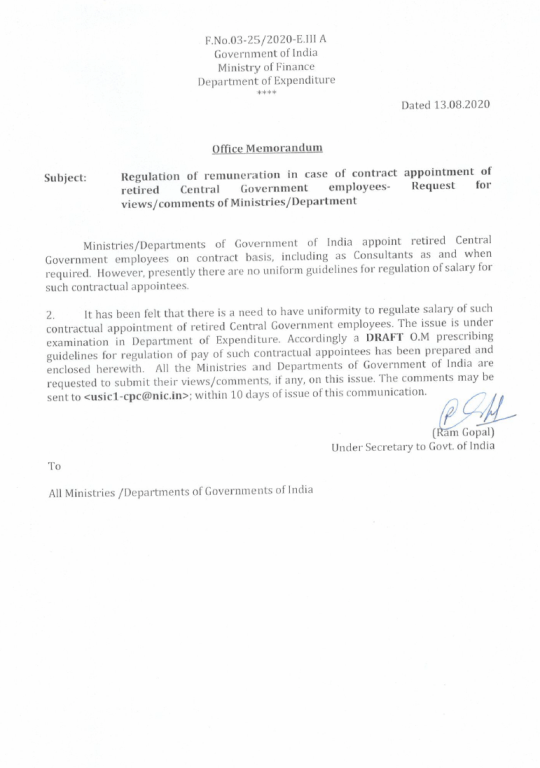 Guidelines for Regulation of Pay in case of contract appointment of retired Central Government employees – Deptt. of Expenditure

Guidelines for Regulation of Pay in case of contract appointment of retired Central Government employees – Deptt. of Expenditure

Subject: Regulation of remuneration in case of contract appointment of retired Central Government employees- Request for views/comments of Ministries/Department

Ministries/Departments of Government of India appoint retired Central Government employees on contract basis, including as Consultants as and when required. However, presently there are no uniform guidelines for regulation of salary for such contractual appointees.

2. It has been felt that there is a need to have uniformity to regulate salary of such contractual appointment of retired Central Government employees. The issue is under examination in Department of Expenditure. Accordingly a DRAFT O.M prescribing guidelines for regulation of pay of such contractual appointees has been prepared and enclosed herewith. All the Ministries and Departments of Government of India are requested to submit their views/comments, if any, on this issue. The comments may be sent to <[email protected]>; within 10 days of issue of this communication.

(Ram Gopal)
Under Secretary to Govt. of India

All Ministries /Departments of Governments of India

F. No.
Govt. of India
Ministry of Finance
Department of Expenditure

The undersigned is directed to say that Ministries/Departments appoint retired Central Government employees on contract basis, including as Consultants on contract basis. However, at present there are no uniform guidelines for regulation of salary in such cases.

2. The existing instructions of Department of Personnel and Training, as contained in their Central Civil Services (Fixation of Salary of employed Pensioners) Orders, 1986, as amended from time to time, provide for regulation of salary in case of re-employment. However, the instructions of Department of Personnel & Training as contained in their OM No. 26012/6/2002- Estt (A) dated 9.12.2002 provides that re-employment beyond the age of superannuation of 60 years shall not be permissible. Also, as per their OM No. 3(3)/2016-Estt (Pay II) dt. 1.5.2017, the pay plus gross pension on re-employment is not to exceed Rs.2,25,000/-, i.e., Pay Level 17 as applicable to an office of the level of Secretary to the Government of India.

Read also |  Compassionate Appointment: Clarification for selecting of applicants who secured equal weightage points on the 100 points scale in merit

3. Department of Personnel & Training has also informed that the instructions on pay fixation in case of re-employment apply only to persons appointed on re-employment, other than those employed on contract basis, except where the contract provides otherwise.. Accordingly, in cases of appointment of retired Central Government employees after the age of superannuation at 60 years on contact basis, the instructions on pay fixation on re-employment will not directly apply.

(A) Cases where contract appointment is made on nomination basis

5. Such cases will cover appointment of a retired Central Government employee on contract basis, including as Consultants, by way of nomination based on the credentials of the past service and not through open market advertisement.

6. At the outset, such appointments shall be not be made as a matter of practice and must be kept at a bare minimum. Such appointments may be made only in the justified exigencies of the official work where public interest is served by the appointment of the retired employee. While making such appointments, adequate functional necessity with clear grounds must be placed before the appointing authority.

7.1 A fixed monthly amount shall be admissible, arrived at by deducting the basic pension from the salary drawn at the time of retirement. It shall be termed as “salary”. The amount of salary so fixed shall remain unchanged for the term of the contract.

7.3 No increment and Dearness Allowance shall be allowed during the term
of the contract.

7.4 No HRA shall ordinarily be admissible, except in those case where special dispensation is allowed by the Appointments Committee of the Cabinet. Further, no HRA shall be admissible in case the appointee has a house either in self name or the name of spouse of the place of appointment.  Also, if the retired employee is retaining the Government accommodation after retirement as per the Rules of Directorate of Estate, the HRA shall be admissible only from the date of vacation of the Government accommodation.

7.5 An appropriate and fixed amount as Transport Allowance for the purpose of commuting between the residence and the place of work shall be allowed not exceeding the rate applicable to the appointee at the time of retirement. The amount so fixed shall remain unchanged during the term of appointment.

7.6 Paid leave of absence may be allowed at the rate of 1.5 days for each completed month of service.

(B) Cases where contract appointment is made on open market basis

9. These orders shall apply to appointments made in the Central Government and shall be effective from the date of issue of the orders. The past cases shall not be reopened in the light of these orders until the normal term of those past cases.

10. The terms of appointment provided for in these in orders shall not apply to cases and to the extent where the Appointments Committee of allows special terms or where special provisions have been allowed with the approval of the Department of Personnel & Training and this Ministry.

11. In their application to appointments in the office of Comptroller & Auditor General of India, these orders issue after consultation with C&AG.

(Under Secretary to the GOT) 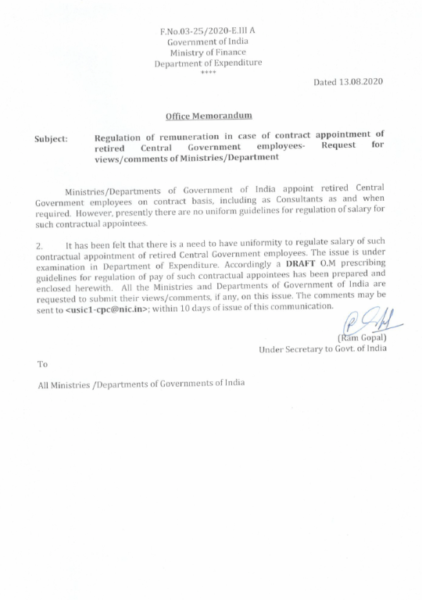