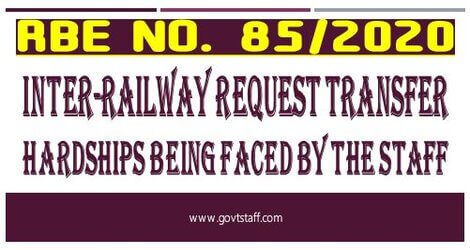 The General Managers (P),
All Zonal Railways and
Production Units.

As the Railways are aware, transfers on request of officials working on the Zonal
Railways cannot be claimed as a matter of right. However, enabling provisions under Ministry of Railways’ decision below Rule 226 of IREC Voll.I allows Transfer of Railway Servant in Group ‘C’ on request on the grounds of hardship from one Railway to another. Detailed instruction/guidelines governing such transfers have been laid down by the Board from time to time.

2. Despite several executive orders issued by the Board from time to time to minimize the hardship of the officials, repeated complaints are being received from staff and the Federations that the transfer requests are not being processed properly. It has been observed that after issue of the NOC by the accepting Railway, the staff concerned are not relieved on time, at times taking more than one year, and by the time the staff are relieved on the basis of the NOC, the vacancies get filled up, and the Railway which had issued the NOC refuses to accept the transferred staff, putting such staff to considerable hardship as he is left with nowhere to go, having been relieved by the parent Railway.

Read also |  RBE No. 97/2020: Retention of railway accommodation by Railway officers/staff on their deputation to Railway PSUs

3. The matter has been considered by the Board. To obviate such issues, it has been decided by the Board that NOC issued by the receiving Railway should be valid for a period of six months, and if transfer of the employees concerned are not effected within this period, the NOC in such cases should be mandatorily revalidated. The employees should be relieved on transfer only after re-confirming the validity of the NOC.