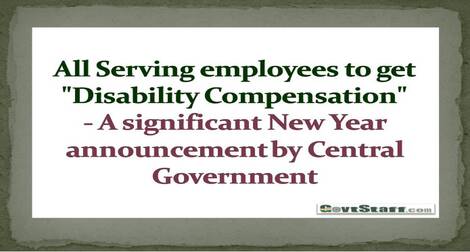 All serving employees to get “Disability Compensation” , if they get disabled in the line of duty: Dr Jitendra Singh

In a significant New Year announcement, Union Minister of State (Independent Charge) Development of North Eastern Region (DoNER), MoS PMO, Personnel, Public Grievances, Pensions, Atomic Energy and Space, Dr. Jitendra Singh today informed of the government decision to extend “Disability Compensation” for all serving employees, if they get disabled in the line of duty while performing their service and are retained in service in spite of such disablement.

Today’s order will particularly provide a huge relief to young Central Armed Police Force (CAPF) personnel like  CRPF, BSF, CISF, etc since disability in performance of duties is generally reported in their case due to constraints of job requirement as well as hostile or difficult work – environment.

Pertinent to mention that this new order will remove an anomaly in service rules, considering the hardship faced by the employees, since as per the earlier OM dated 5/5/2009, the provisions of disability benefits under Central Civil Services(CCS) (EOP) Rules did not provide such compensation to those government servants who were appointed on or after 1.1.2004 and covered under National Pension  System (NPS).  However, with the new order issued by the Department of Pensions in the Ministry of Personnel, the employees covered under NPS will also get benefits under Rule (9) of Extra Ordinary Pension (EOP).

In other words, if a government servant gets disabled while performing his duties and this disablement is attributed to government service, in that case if he is still retained in the service in spite of disablement, a lump sum compensation will be paid to him by arriving at the capitalized value of the disability element, with reference to the Commutation Table in force from time to time.

Expressing his satisfaction on today’s order, Dr. Jitendra Singh said, the Modi Government is making all efforts to simplify the rules and to do away with discriminatory clauses. The ultimate objective of all these new initiatives is to provide ease of living for the Government servants even after they have superannuated and become pensioners or family pensioners or elder citizens, he said.

In another employee-friendly decision, the Ministry of Personnel recently did away with minimum qualifying service of 10 years for pension, if a government servant is incapacitated due to bodily or medical infirmity and retired from government service. Accordingly, Rule 38 of CCS (Pension) Rules was amended to provide Invalid Pension at  50% of the last pay, even if the employee had not completed minimum qualifying service of 10 years.