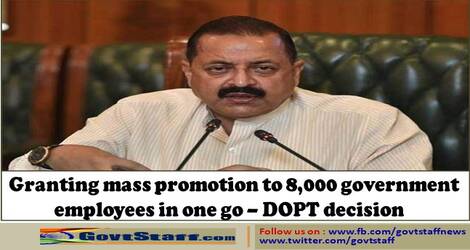 Dr Jitendra Singh said, it was disheartening to see government employees attaining retirement from service without getting one’s due promotion and thanked Prime Minister Shri Narendra Modi for this kind decision. Of the total of 8,089 promoted employees, 4,734 are from CSS, 2,966 from CSSS and 389 from CSCS.

Dr Jitendra Singh also met delegations of Central Secretariat officials on several occasions to thrash out the issue, as he considered that these three services – CSS, CSSS and CSCS form the backbone of the central secretariat administrative functioning.

Dr Jitendra Singh also recalled that over three years back, DoPT had carried out mass promotions of nearly 4,000 officials in different departments at different levels, which had been widely hailed. Many of these promotion orders were also issued, subject to the outcome of pending writ petitions, he recalled.

Dr Jitendra Singh said that the secretariat services are an essential tool of governance, since the notes and drafts prepared by them form the bedrock of Government policies as the proposals pass through various stages in the government hierarchy.