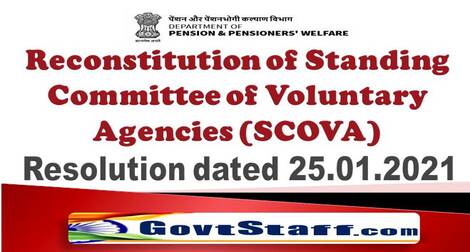 Consequent upon expiry of tenure of the Standing Committee of Voluntary Agencies (SCOVA) constituted vide this Department’s Resolution No. 42/12/2017-P&PW(G) dated 31st January, 2018 for a period of two years, the Government of India has decided to reconstitute the SCOVA with the following composition.

Read also |  No ITR for Specified Senior Citizens: Through Finance Act 2021 a new section 194P was inserted in IT Act

3. The SCOVA will hold its meeting as often as may be necessary. However, it will meet at least once in a year.

4. The SCOVA will function to promote the following objectives:-

(i) To provide a feedback on implementation of policies/programmes of the Department of Pension and Pensioners’ Welfare.

(ii) To discuss and critically examine the policy initiatives ; and

(iii) To mobilise voluntary efforts to supplement the Government action.

5. Travelling Allowance and Daily Allowance to Non-official members for attending the meeting of SCOVA shall be regulated in accordance with the provisions of SRI 90 and.orders of Government of India there under as issued from time to time and this Department’s letter no. 42/1 1/2014-P&PW(G) dated 19.05.2014.

6. The expenditure involved will be met from within the sanctioned budget grant of Department of Pension & Pensioners Welfare.

Ordered that the Resolution be published in the Gazette of India

2. Ordered also that a copy of the Resolution be communicated to all Ministries/Departments of the Government of India and all other concerned.

Copy for information to :