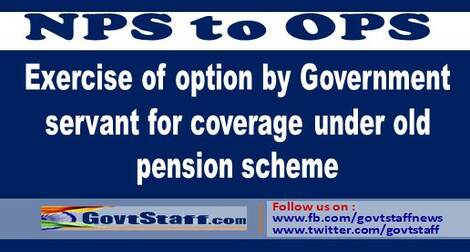 Subject: Coverage under Central Civil Services (Pension) Rules, 1972 of those Central Government employees whose selection for appointment were finalized before 01.01.2004 but joined Government service on or after 01.01.2004.

In continuation to this Department’s O.M of even number dated 17.02.2020 providing one-time option to Government servants for coverage under Central Civil Services (Pension) Rules, 1972 in place of National Pension System who were declared successful for recruitment in the results declared on or before 31.12.2003 against vacancies occurring before 01.01.2004 and are covered under the National Pension System on joining service on or after 01.01.2004.

2. The said Office Memorandum provides for cut off dates for various activities involved in the process of exercising of option, deciding representations by appointing authorities and closure of NPS accounts of the concerned Government servants.

3. In view of the country-wide lockdown in the country due to outbreak of Covid-19 pandemic and references received from some Ministries / Departments for extension of time schedule prescribed in the said OM, in partial modification of this Department’s OM of even number dated 17.02.2020, it has been decided to extend the above cut-off dates as under:

Read also |  Pension Adalat on 16th March 2022 at 10:30 AM through Video Conferencing facility for all Central Civil Pensioners – Details of Online Registration and sending grievances

(S. Chakrabarti)
Under Secretary to the Government of India