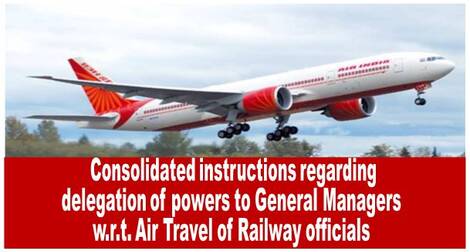 Instructions regarding delegation of powers to GMs w.r.t. air travel have been issued from time to time. Now it has been decided that for ready reference, consolidated guidelines may b issued to Zonal Railways.

Accordingly, the consolidated guidelines are as follows:

(ii) Grant of permission by the General Manager to not below Jr. Scale officers to travel by Air on duty would, however be subject to the following conditions:

a) These powers may be exercised only by General Managers and not by CAOs, and, are not to be re-delegated further. However, the Chief Administrative Officer, COFMOW/New Delhi, DCW/Patiala and MTP/Chennai may also exercise these powers with the prior personal concurrence of PFA.

b) Grant of Air Travel Permission to Officers in NFSAG/SG and below on Indian Railways, either one way or two ways, may be approved personally by the General Manager of Railways with the prior personal concurrence of PFA.

c) Air travel will be permitted only in cases where the duration of the journey one-way is more than 12 hours by rail.

d) Each proposal regarding Air Travel would requite to be justified on merits. The competent authority while approving Air Travel would apply his mind and consider whether the available train connectivity and time taken justifies the same. General Manager while using his discretion to perinit one way or two ways Air Travel may consider both the need of the journey and the.urgency that necessitates Air Travel.

e) It may be ensured that permission for Air Travel is given judiciously and restricted only to absolutely essential official requirement that is recorded, subject to availability of -budgetary provisions.

This has the approval of Board (Member Finance).