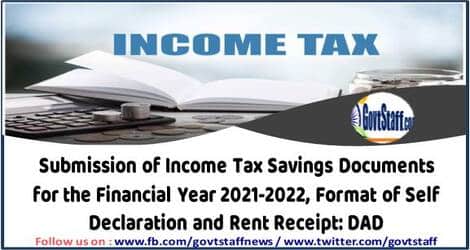 Submission of Income Tax Savings Documents for the Financial Year 2021-2022, Format of Self Declaration and Rent Receipt: DAD

Submission of Income Tax Savings Documents for the Financial Year 2021-2022, Format of Self Declaration and Rent Receipt: DAD

For the purpose of assessment and regularization of Income Tax for the Financial Year 2021-22 (Assessment Year 2022-23) all the officers and staff are requested to submit the following documents :-

(ii) Any Officers an. Staff claiming exemption o Income Tax under IT Act 1 961 under section 1 97 who have not forwarded the Exemption Certificate for FY 2021-22 from Income Tax Department are advised to do so at the earliest; failing which Total Tax Payable will be deducted at source and Tax refund if any should be claimed only from IT Department. In this connection it is also stated that exemption allowed will be limited to the amount of salary and period of exemption mentioned in the Income Tax Exemption Certificate as received from Income Tax Department. Any amount exceeding the amount mentioned in the Certificate and any salary drawn prior or after the period mentioned will be liable for tax deduction. Moreover, the said certificate must pertain to TAN of CDA Guwahati, i.e. SHLC00100C.

(iii) Those employees who had produced “Self Declaration” earlier, should also submit Proof of savings/documents along with Annexure I and Annexure II failing which the “Self Declaration” submitted earlier shall be considered null and void and Tax Deduction at source shall be done accordingly.

It is therefore requested to submit the above documents (whichever applicable) duly completed in all respect on or before 15/12/2021 to enable the ODO to regulate the income Tax deduction at source during the current financial year. In absence of receipt of the aforementioned documents from the official, the Income Tax will be deducted based on the available information at this end and any refund, if admissible may be claimed only from the Income Tax department.

I hereby declare the information state4 above is true and correct and will inform immediately of any change in the above fact.

*Please note that mandatory contributions made towards GPF, NPS through Paybill are already accounted for in TULIP SYSTEM.