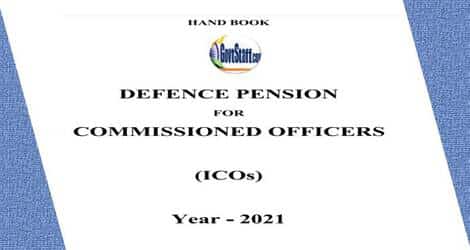 Pension in respect of Armed Forces Personnel is in fact a very complex subject in itself as the orders issued thereon are scattered. Nothing is available on which one can lay his hands for a compact knowledge. This has given me an idea to put all the relevant orders issued on a particular subject at one place in the form of a Handbook.

With this fact in view, I review the Govt. letters issued upto 12/2020 and summarize them precisely on each subject and tried to put them in the Handbook separately for PBORs and ICOs.

For this I got blessings of benevolent Principal Controller Mr. Rajiv Ranjan. I express my heartfelt gratitude to him.

Further, I would also like to convey my sincere thanks to Officer In Charge Grants Tech. Mr. A. K. Malviya and cooperation of his staff at each stage as the same have helped me a lot.

At last, I request esteem readers to ignore the shortcomings, if any, considering the same as my incompetency.

l. (a) The minimum period of qualifying service for earning retiring pension shall be 20 years (15 years in the case of late entrants).

(b) Serving JCOs/ORs granted EC/SSC will be eligible for retiring pension after 12 years of qualifying service actually rendered.

4. PERIODS OF SERVICE QUALIFYING FOR PENSION