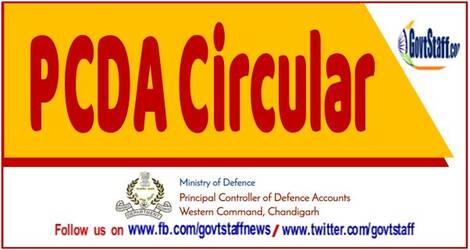 Payment of Arrears of Pension – PCDA Pension Circular No.226

Payment of Arrears of Pension – PCDA Pension Circular No.226

(Through WePayment of Arrears of Pension – PCDA Pension Circular No.226bsite)

Sub: Payment of Arrears of Pension.

As per existing provisions on the subject, pension should be claimed as and when it falls due. If a pensioner fails to draw his/her pension for a period of 12 months from the date it fell due, the same may be ceased by the Pension Disbursing Authority (PDA). If such pensioners re-appears at later stage and prefer his/her claim to draw his/her pension, PDA may resume the payment of monthly pension accruing thereafter after verifying the genuineness and identity of such pensioner and fully satisfying himself with the reasons submitted by the pensioner for his/her prolonged absence. However, arrears will be payable only after sanction of the competent authority.

2. The pensioner concerned in such cases should be advised to submit an application on IAFA (CDA)-651 with an explanation for his/her failure to draw the pension within the stipulated period for the payment of arrears of pension. Apart from other documents, a Certificate form nearest Police Station where the pensioner was residing during the period of non-drawal of pension that he/she is not involved in any criminal offence/case is required to be submitted with the arrears of pension claim.

View :  Payment of Commuted Value of Pension – Clarification by CPAO

3. In the case of Life Time Arrears of pension due to the estate of deceased pensioners, the claim should be preferred on IAF (CDA)-652.

(ii) The claimant has been identified and I am satisfied that he/she is the person, who was granted Pension/C.A./J.I* as per details given by him/her.

The following documents are enclosed:

The claimant has been identified by the witness mentioned above who have been duly warned of the responsibility they are undertaking,

The following documents are enclosed:

Accordingly, amended IAFA (CDA)-651 and IAFA (CDA)-652 are enclosed herewith. All Pension Disbursing Authorities are requested to adhere above changes while submitting arrear claims for sanction of the competent authority.