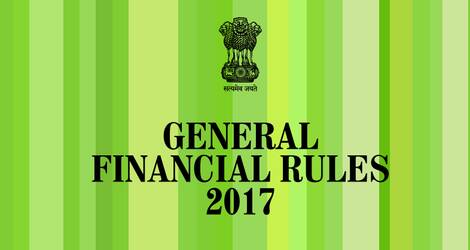 Rule 1 Short Title and Commencement: These rules may be called General Financial Rules, 2017 and they shall come into force at once and shall be applicable to all Central Government Ministries/ Departments, attached and subordinate bodies. The provisions contained in GFRs are deemed to be applicable to Autonomous Bodies except to the extent the bye-laws of an Autonomous Body provides for separate Financial Rules which have been approved by the Government.

Rule 2 Definition: In these rules, unless the context otherwise requires-

(ii) “Administrator” means Administrator of a Union Territory, by whatever name designated;

(iii) “Appropriation” means _ the assignment, to meet specified expenditure, of funds included in a primary unit of appropriation;

(iv) “Audit Officer” means the Head of an Office of Audit;

(v) “Competent Authority” means, in respect of the power to be exercised under any of these Rules, the President or such other authority to which the power is delegated by or under these Rules, Delegation of Financial Power Rules or any other general or special orders issued by the Government of India;

(x) “Controlling Officer” means an officer entrusted by a Department of the Central Government with the responsibility of controlling the incurring of expenditure and/or the collection of revenue. The term shall include a Head of Department and also an Administrator;

View :  Guidelines for Regulation of Pay in case of contract appointment of retired Central Government employees - Deptt. of Expenditure

(xiv) “Financial Year” means the year beginning on the ist of April and ending on the 31st of March following;

(xviii) “Head of Office” means (a) a Gazetted Officer declared as such in the Delegation of Financial Powers Rules and (b) any other authority declared as such under any general or special orders of the competent authority;

(xx) “Local Fund” means a local fund as defined in Rule 652 of the Treasury Rules;

(xxv) “Public Works” means civil/ electrical works including public buildings, public services, transport infrastructure etc., both original and repair works and any other project, including — infrastructure which is for the use of general public;

(xxvi) “Re-appropriation” means. the transfer of funds from one primary unit of appropriation to another such unit;

(xxix) “Subordinate authority” means a Department of the Central Government or any _— authority subordinate to the President;

(xxxi) CAPEX model: In the CAPEX Model, Capital expenditures is used by the buyer to straightway purchase goods followed by procurement of consumables, arranging comprehensive maintenance contract after warranty period and finally disposing the product after useful life;

(xxxii) OPEX model: In the OPEX model, the Seller provides the goods, maintains it and also provides the consumables as required and finally takes back the goods after useful / contracted life. The expenditure is made by the Buyer in a staggered manner as per the terms and conditions of the contract.

Rule 5 Removal of Doubts: Where a doubt arises as to the interpretation of any of the provisions of these Rules, the matter shall be referred to the Ministry of Finance for decision.

(i) The systems and procedures established by these Rules are subject to general or special instructions/ orders, which the Ministry of Finance may issue from time to time.